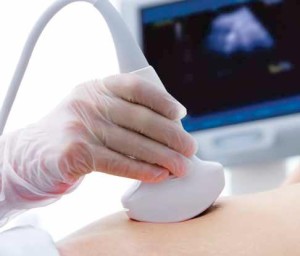 Indian ultrasound story has walked ahead from black and white equipments to 3D color dropplers. Experts say more are there in store, a closer look!

Diagnosis is the first step of treating any disease and ultrasound is one of the most commonly used diagnosis process for curing a disease. Its a safe, painless method for examining the internal organs that avoids the use of radiation. Instead, high-frequency sound waves are generated and the echoes that result from their bouncing off the soft tissue structures are used to measure size, to detect structural abnormalities etc.

Doctors recommend ultrasound test for a various uses. In obstetrics, to monitor growth of the baby and check that there are no abnormalities. In urology, for diagnosis of urinary bladder, scrotal, prostatic and kidney disease and the like.

How it works Ultrasound examination is a painless procedure that takes between 15 minutes to one hour to complete. Usually, a lubricating gel is used to help conduct
the sound waves into the body. This is applied on the skin by the lab person then a probe is held against the skin and moved over its surface. While the ultrasound scan is in progress, the images are displayed on a video monitor. Permanent copies of the examination results can be produced as still pictures or as a video recording.

For more specialised kinds of ultrasound examination the probe is inserted into the body. For example, the probe can be swallowed into the gullet (oesophagus) in order to
obtain detailed pictures of the heart valves.

Indian ultrasound market is one of the few markets in the healthcare industry that has emerged profitable during the economic downturn in 2008-2009. India is one of the fastest growing regions for the ultrasound market, marking an expected compound annual growth rate (CAGR) of about 15 percent between 2009 and 2016 as observed by Frost & Sullivan.

The reason behind this growth is high population, booming economy, Governments efforts to decrease maternal and infant mortality rate and high-end, user-friendly machines. There is a rise in demand for ultrasound machines designed for specialities such as cardiology and radiology and in the knowledge of the advantages offered by the portable color ultrasound systems. Increasing awareness about screening for breast cancer has driven the number of ultrasound procedures. Advanced technology such as echocardiography has evolved into a non-invasive method for imaging, driving further growth.

Diagnostic success rates, a decreasing price trend, improved handling of the devices and the use of ultrasound as a primary screening method for breast cancer are key factors influencing the volume of ultrasound procedures in India. Advancing technology has freed ultrasound users from the physical restrictions of cart-based systems, making it easier to bring the imaging to the patient instead of bringing the patient to the imaging and that too without sacrificing image quality.

The total ultrasound market revenue in India in 2011 was estimated to be nearly USD120 million and the market is expected to double by 2015; while the global market for ultrasound equipment is projected to reach USD 6.9 billion by the year 2017, driven by applications in new segments, such as administration of emergency medicine and introduction of portable, handheld ultrasound devices. While demand  or ultrasound equipment from developed regions is primarily expected to emanate from replacement demand, strong economic growth and increasing healthcare spending in developing markets are expected to fuel demand for new equipment. Asia Pacific constitutes the fastest growing regional market with a CAGR of 9.4 percent in 2011.

The ultrasound market in India is growing at a steady pace mainly because the Government is implementing schemes to reduce mortality rate. Central schemes like the Janani Suraksha Yojna have been launched so that the rural women can avail professional medical care during pregnancy and have deliveries in primary health centres and hospitals, rather than at home

According to Frost & Sullivan, ultrasound equipment market in India stood at `600 crore (USD 120 million) in 2011, with total sales of 4431 units. Color Doppler continues to edge out their black-and-white counterparts, increasing their dominance to 93 percent. With 3341 units of Color Doppler sold in 2011 it dominates Indian ultrasound market with a 12.9 percent growth in revenues.

Mid-end Color Doppler equipment is the most preferred purchase, with sales of 1456 units, valued at `220 crore. High acceptance of mid-end ultrasound equipment by the medical fraternity with its increasing usage in obstetrics/ gynecology, regional anesthesia, pain management, oncology, rheumatology, and various surgical applications has led to an impressive value-wise and unit-wise contribution of 44 percent in this segment.

Portable ultrasound segment is expanding rapidly as the functionality of these systems has approached that of the cart-based systems. With total sales of 780 units, portable segment is valued at `57.6 crore.

The ultrasound market in India is growing at a steady pace mainly because the Indian Government is implementing schemes to reduce mortality rates during pregnancy. Central schemes like the Janani Suraksha Yojna have been launched to encourage more rural women in the poor stratato avail professional medical care during pregnancy and have deliveries in primary health centers and hospitals, rather than at home. The Government is also providing cash benefits and free antenatal checkups for expectant
mothers through such schemes.

Ultrasonography is now finding applications in several medical specialities. In cardiology, it is possible to analyse the rate of blood flow and narrowing of blood vessels by measuring the frequency of reflected waves. Realtime scanners can capture moving images like the heart beating. They also aid physicians in conducting biopsies
by guiding the fine needle into the tissue mass. Recent advances also allow for guided antenatal procedures like amniocentesis, which is done to detect disorders like Downs syndrome, etc. Smaller, high-resolution ultrasonic probes also find applications in the study of small organs like thyroid, salivary glands, etc. These are also used to detect hemorrhages and other anomalies in the human eye

In India, mobile medical units with portable ultrasound machines go to smaller towns and villages to provide prenatal checkups and cancer screenings for the breast, cervix and prostate, etc. With these additional, more specialised medical applications coming up every day, the market is growing rapidly, becoming more technologically advanced and user-friendly.

Despite the development of the ultrasound market in India, there are certain factors that have the potential to restrain this growth. High import duty The high import tax levied by the Government on ultrasound machines and this cost is passed on to the customers and patients end. The steady influx of low-cost machines from China and Korea has resulted in a price war in the competitive market environment in India, with major players being forced to reduce their margins to stay in the game.

On the forefront of all challenges is PCPNDT Act, which had been genuinely enacted to prevent deliberate female infanticides. It prohibits advertisements relating to prenatal determination of sex and prescribes punishment for its contravention. All places using pre-conception and sex selection techniques/procedures and any place having equipment capable of detecting the sex of the fetus and those related to genetic counseling need to be registered. All genetic counseling centers, genetic laboratories, and genetic clinics, include sonography centers, mobile sonography vans, and those having imaging machines and advanced versions of ultrasound machines require registration. Infertility/sterility clinics and IVF centers also have to be registered. Strict compliance with the PNDT Act may impede the installation of ultrasound equipment. This has led to a restriction in free movement of ultrasound systems.

According to Frost & Sullivan, ultrasound equipment market in India stood at `600 crore (USD 120 million) in 2011, with total sales of 4431 units. Color Doppler continues to edge out their black-and-white counterparts, increasing their dominance to 93 percent. With 3341 units of color Doppler sold in 2011 it dominates Indian ultrasound market with a 12.9 percent growth in revenues

Ultrasound machines may be relatively safe, but they can still have a mechanical or thermal effect on tissue, especially when a machine uses increased output. Regulations on these machines have not changed the ways in which they can be used in a medical setting, but they have placed the onus on the operator of the machine, rather than the manufacturer to ensure that a diagnostic test is done safely.

Point-of-care ultrasonography ultrasound is used across the board to guide or monitor vascular access for procedures. Intravascular ultrasound (IVUS) is primarily used to view the coronary arteries from inside, with the help of high-frequency sound waves this produces cross-sectional images and yields information about the composition
of plaques that may have formed on the vessel walls.

Advanced 4D images in ultrasound allow for the capture of a moving realtime video that markedly improves treatment success rates. Earlier, a major  disadvantage of ultrasound testing was that it was very operator dependent; but the recent 4D capability reduces the risk of operator errors and increases user-friendliness and ease of handling.

Elastography is another recent trend in ultrasound machines, which can be used to detect tissue elasticity to ascertain the boundaries of tumor masses and check if tumors are malignant.