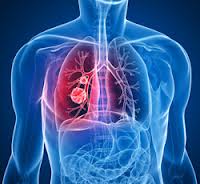 A team of scientists has found a new combination therapy, developed for the first line treatment of advanced non-squamous non-small-cell lung cancer, to improve progression-free survival (PFS) of the patients in a trial involving 1,202 people.

The scientific rationale behind using the combinations was that Bevacizumab may enhance the ability of atezolizumab to restore anti-cancer immunity by inhibiting vascular endothelial growth factor (VEGF)-related immunosuppression and other mechanisms, while chemotherapy may induce immune responses.

The chemotherapy used in the trial was carboplatin plus paclitaxel. Atezolizumab is a monoclonal antibody that inhibits programmed death-ligand 1 (PD-L1), while bevacizumab is a biologic antiangiogenic drug.

“There was a significant and clinically relevant improvement in progression-free survival favouring the addition of atezolizumab to bevacizumab and chemotherapy. The results show that there is a way to improve the efficacy of platinum-based chemotherapy in patients with advanced non-squamous NSCLC. There were no new safety signals or toxicity issues with this combination so it appears to be a feasible approach for this group of patients,” Prof Reck said.

Commenting on the treatment, Prof Solange Peters, Head of Medical Oncology, Department of Oncology, Centre Hospitalier Universitaire Vaudois (CHUV), Lausanne, Switzerland, said: “Immunotherapy is a standard of care treatment after platinum-based chemotherapy in patients with advanced NSCLC. Frontline immunotherapy alone is beneficial in those with a high PD-L1 expression, who make up less than a third of NSCLC patients.

“The combination of immunotherapy and platinum-based chemotherapy showed positive response rates in unselected non-squamous patients (without PD-L1 selection) in a hypothesis-generating phase II trial, which led to US Food and Drug Administration (FDA) approval,” she added.

“IMpower150 is the first phase III randomised trial to formally uate the combination of immunotherapy and chemotherapy versus chemotherapy frontline,” she continued.

“The backbone therapy includes bevacizumab which might, by targeting VEGF, facilitate the immune response and the trafficking of T cells. Median PFS for the immunotherapy arm in patients without EGFR mutations or ALK rearrangements had a promising hazard ratio of 0.62 and a median PFS improvement of a little less than two months.”

According to Peters, the benefit of immunotherapy is best observed at later time points. “When you look at the 12-month PFS, you double the number of patients who have not progressed from 18% without immunotherapy to 37% when you add the immunotherapy,” she said.

“This is very, very promising. Doubling PFS at one year is something we have not seen with any targeted therapy in unselected patients to date.”

The results of the trial were recently presented at the ESMO Immuno Oncology Congress 2017.