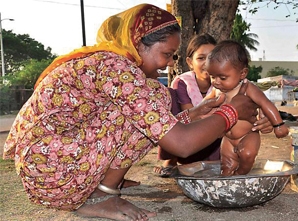 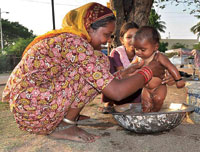 According to the National Family Health Survey, India has the highest number of cases of anaemia in the world. Almost 79.1 percent of Indias children between the ages of three and six, and 56.2 percent of married women in the age-group 15-49 have been found to be anaemic in 2006. Almost 20 percent of maternal deaths are caused directly because of iron deficiency, or anaemia, which is a contributory factor in 20 percent more deaths.

Indias maternal and infant mortality levels are very high and repeated childbirths are seen as an insurance against multiple infant and child deaths. Vast numbers of people cannot avail services even when they are available, due to lack of knowledge and access.

The progress in the last two years has been remarkable, which gives the hope that the importance of population stabilisation has been recognised by people themselves. This has now to be sustained and accelerated particularly in the Hindi belt states where fertility levels are very high. Many of the factors that have an impact on the population momentum are cultural in nature. Attitudes to early marriages, expectations about early childbearing, and disregard for the need for spacing between children need to be altered. Low female literacy impacts adversely on safe motherhood and the maternal care that their children receive.

In December 2005, Gujarat launched a pilot voucher scheme, Chiranjeevi Yojana, to facilitate institutional deliveries among BPL women. As per UNICEF records, by October 2009, more than 800 providers participated in the programme and more than 384,920 deliveries had been supported through the scheme. 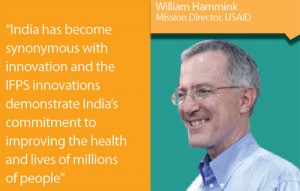 The total fertility rate of Uttar Pradesh is 3.8. The infant mortality rate is 67 and maternal mortality ratio is 440 (SRS 2004 – 2006), which are higher than the national average. In Uttar Pradesh, the Innovations in Family Planning Services (IFPS) project began in 1992 as a joint effort of the Government of India and USAID-India. It is intended to serve as a catalyst for the Government of India in reorienting and revitalising the countrys family planning services. In Uttar Pradesh, the project has been implemented in three phases (1992“2004; 2004“2009; 2009“2012). The objective of the scheme is to increase the Contraceptive Prence Rate (CPR) among the BPL families and address their family planning requirements.

Voucher schemes, generally operated as public-private partnerships (PPPs), or collaborative efforts between the public and private sectors, have had positive effects on health service utilisation in many developing countries. Four voucher programmes, called Sambhav, were implemented from 2006-2012 as part of the IFPS Project, a bilateral project of the Govt. of India and the United States Agency for International Development (USAID), to expand access to FP/RH services to below poverty line (BPL) beneficiaries in selected districts of Uttar Pradesh, Uttarakhand, and Jharkhand.

Speaking in Lucknow, William Hammink, Mission Director USAID said, The innovations in family plan-ning that resulted from the partnership between USAID, the Government of India, the Government of Uttar Pradesh, civil society, and the community, demonstrate that challenges can be addressed using local resources and solutions. India has become synonymous with innovation and the IFPS innovations demonstrate Indias commitment to improving the health and lives of millions of people. 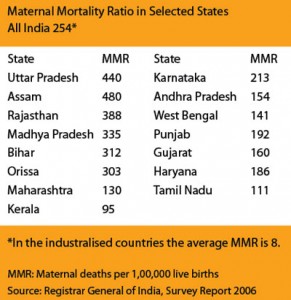 For the government, the voucher schemes help to meet public health goals and reduce strain on public sector human resources and facilities. Private nursing homes and hospitals are willing to offer services at reduced rates in return for increased client volumes”which provides a more stable flow of resources. Regular monitoring and corrective action was essential throughout the voucher system implementation process.

The voucher programmes, and the quality of services in the private sector, played a key role in increasing service uptake, especially for maternal health services, such as institutional delivery. From the baseline to end line in Haridwar, even with the public sector Janani Suraksha Yojna, delivery in government institutions by BPL women decreased slightly, from 12.1 percent to 9.5 percent. In contrast, delivery in the private sector among BPL women more than doubled, from 15.0 percent to 37.5 percent, during the same time period, suggesting that the poor valued the quality of services offered by private providers.//