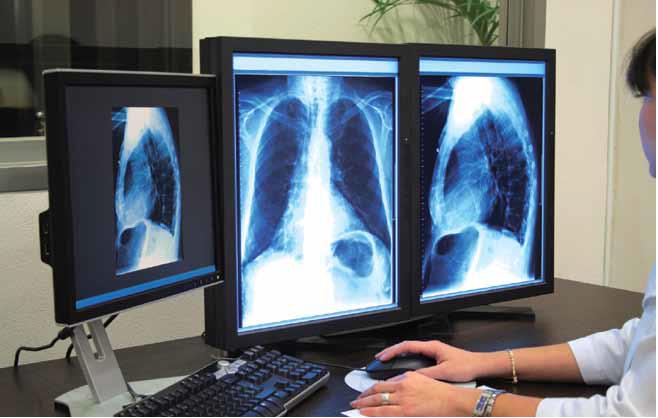 The increasing proportion of imaging modalities that generate images in digital form has lead to the development of digital image management systems. Such systems referred to as Picture Archiving and Communication Systems (PACS) are emerging in clinical and radiological environments. PACS is an integrated set of information technology systems designed to provide a complete solution for image management in a film-less radiology department.  Further to its importance in the radiology department, emergence of high-end modalities in cardiology and oncology requires archiving and post-processing of images where PACS is becoming mandatory.

Gaurav Mundra, Director & Chief Operating Officer, Truworth Infotech Pvt Ltd, while sharing his perspective on this technology, said, “RIS/PACS is going to be the next big wave in Healthcare IT for larger hospitals. They will need special support in integration with existing systems and legacy equipment. They must look at the cloud as an option to expensive hardware and maintenance. Pricing should move to an ASP model too.”

An integrated system, which already knows certain information like patient’s history, reason for the examination, and the tests ordered, these systems can now automatically predict or rather anticipate specific views to the radiologist. It lessens the manipulation of image manually and gives more time to the expert for faster uations.

When introducing PACS to the hospital environment, it is critical to establish a HIS or RIS before a PACS. Often a retrospective merger of the PACS database lends itself to higher costs and data entry inconsistencies. All components of HIS or RIS and PACS must also be bi-directional and integrated fully with electronic patient records if present. If this is not coordinated, a hospital may find itself film-less in the radiology department, but resigned to copying images on costly laser film for other departments to use, which is an incredibly costly state of affairs.

According to Frost & Sullivan technical insights, interactions between PACS and radiology RIS require compatible hardware, a common protocol for handling the data, and commensurate operational definitions. However, PACS and RIS are based on different protocols. PACS operates on the Diagnostic Imaging and Communications in Medicine (DICOM) standard, while RIS operates on Health Level Seven (HL7). DICOM is a transmission protocol that formats, stores, prints and transmits images to and from the imaging modalities and the PACS. HL7 is used to register patients, process orders, and store reports, but it cannot manage DICOM image data. In order for the PACS to do its job, it must be able to communicate with RIS. Therefore, interfaces are used to create an interface between the two systems. The interface (also known as a PACS ‘gateway’ or ‘broker’) is a hardware- and/or software-based module that allows PACS to communicate with the RIS. However, it has its drawbacks, including added cost to the PACS, and a potential point of failure that may result in orphaned studies (studies that are ‘lost’ or inaccessible to the data system).

Although the leading vendors continue to support RIS/PACS integration through the standard HL7 interface, current developments in image management technology are leaning towards a completely integrated RIS-PACS solution that manages all radiology-related numerical and imaging data from a single database. This is known as the fully integrated RIS-PACS. Although a number of current systems use the embedded or internal PACS broker and call them ‘brokerless’, a truly integrated RIS-PACS is one in which both types of data are indexed in a common database allowing immediate interaction of both types of data within the complete RIS-PACS system.

Dr Adam CHEE, Chief Advocate (Director), binaryHealth Care.com says, “There is no standard core body of knowledge in medical imaging, which is a major drawback.  Further, though everybody thinks that medical imaging informatics is limited to radiology, it is not. PACS is not just limited to images”it is offers much more than that.”

PACS implementation is slowly catching up in India with more hospitals aiming towards a paper-less environment. The Indian PACS market is estimated to beUS $5.5 – 6 Million and is expected to grow at a compound annual growth rate of 27 percent from 2007 “ 2011.

Gaurav Mundra says, “Compatibility with legacy systems is the biggest driver as costs for new systems is very high. If there are solutions that allow using older equipment or existing pieces of software with the new RIS/PACS, we have a winner.”

Dr Ashish Dhawad, Founder & CEO, Medsynaptic Pvt Ltd says, “Market and awareness for PACS & RIS continues to grow rapidly. More and more hospitals are budgeting for technologies like PACS based on the positive experience and advantages offered to existing clients who have opted for this technology.”

The medical imaging market is currently in a transition state as healthcare facilities around the world are now opting for digital radiography solutions over conventional radiography solutions. One of the most important reasons for this is the emergence and implementation of PACS network. Subsequently, the enhancement in the clinical value of PACS has also been a result of installation of direct digital modalities.

Radiologists are using it even for teleradiology services to provide consultation and second opinion to remote areas in India as well as abroad. Technology savvy doctors are providing consultation and opinion even when away from healthcare facilities by accessing the records online from the comforts of their home or clinics.

DICOM
PACS was launched with an idea to collect images from all modalities to a digital archive and to allow the transmission of these images to other workstations through local area network (LAN). Further, the traditional transmission control protocol/internet protocol (TCP/IP) was gradually replaced by digital imaging and communications in medicine (DICOM) protocol, which was capable of managing any sort of medical images.

“Everybody thinks that medical imaging informatics is limited to radiology, it is not. PACS is not just limited to images”it offers much more than that”

The DICOM protocol hence extended from the radiology department to the entire clinical department in a healthcare facility and became the standard of clinical data transmission. The increasing popularity of PACS is further driving the sale of high-end radiology information systems (RIS), a computerised system for patient registration, as text-based RIS products such as film tracking databases will be marketed with PACS solution.

Cloud computing is the holy grail of PACS/RIS. Once we have enough bandwidth to put all the images and data on the cloud, the cost would go down dramatically as hospitals would no longer need the expensive storage and servers for processing. PACS in the cloud, support for handheld devices like ipad and mobiles, thin client 3D rendering, multisite Hospital connectivity and data mining are some important tech trends in RIS/PACS.

Says Gaurav Mundra, “Compatibility, Integration & Data Migration are the key challenges which is why we are purely focused on this area. Managing and maintaining standards in the industry will also be key for wider user-base.” However, Dr Ashish Dhawad   Founder & CEO, Medsynaptic Pvt Ltd says, “Indian hospitals still cannot go completely filmless. Smooth Integration with HIS/Equipment and pricing pressure are some other challenges.”

“If there are solutions that allow using older equipment or existing pieces of software with the new RIS/PACS, we have a winner.”

It is crucial to however note that in absence of a PACS of PACS like solutions, the advantages of a digital radiography system are lost, more or less because there is no electronic information management system to store and retrieve patient information. The printouts of digital scans offered on a film are or the scanning of x-ray films to produce digitized images are both inefficient procedures. Hence a primary requirement for installing DR and CR solutions is to first install a viable information management system to efficiently manage all the data produced in these procedures.