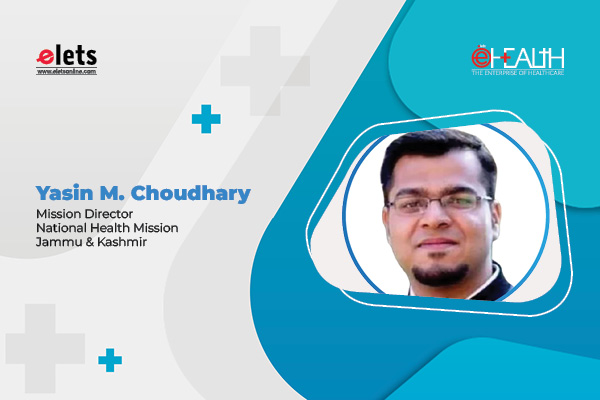 The need to embrace technology to remain relevant in the rapidly evolving healthcare scenario has become pertinent. The future of healthcare industries has a massive opportunity to introduce the right tools to help both patients and providers was the overarching thought at the 3rd Elets Healthcare Transformation Summit.

Commencing the inaugural session of the 3rd Elets Healthcare Transformation Summit, Yasin M. Choudhary, Mission Director National Health Mission, Jammu & Kashmir conveyed that ‘Health Data is the new gold.’ The concept of futuristic healthcare is something that would be completely established upon the data of patients, medical records, and all the gambit under the medical records that we get and manage to leverage which makes the healthcare system more accessible for the public.

He contextualised the leading health sector goal that was laid out that is the Universal Health Coverage (UHC) which implies ensuring identical and similar standards of healthcare for every person on the planet. He added that before India calls itself as the next superpower, it must be ensured that all citizens have the same quality of healthcare and how technology can be leveraged to do that. In terms of UHC, there are two main pillars, equity and equality which means reaching out to the most vulnerable and disadvantaged sections of the community and assuring that they get the same level of healthcare as the most privileged ones.

He added, during the covid pandemic, it was a time when they had to match the pace at which the virus was exploding and at that moment mass coverage was the key. They needed a system that was durable and expandable and the key was leveraging technology that helped them to repeat services for numerous people. The way healthcare innovation has grown is taken to various turns in our country which has been both centralized and decentralized, driven through both centre and the state. He said, “We are a mature nation so we can’t think about building something from scratch. Whatever solution we have to think of would have to take into consideration whatever existing infrastructure we have.”

To give a brief where we stand in terms of technical innovation in this county, he added that within the ministry, the National Health Mission has been at the forefront of introducing technology-based innovations. He stated that there are some very strong, old systems and portals like Health Management Information System (HMIS) and Reproductive and Child Health Portal (RCH) which have stood around for nearly a decade. He also averred that there is an incredibly useful database, being collated by the ASHA workers and the m-health workers, with us which is going to be our foundational building block for any further solutions. We also have to conceptualize and develop the newest technologies for specific sub-sectors within the health sector.

He also shared about the app which they developed for one of the oldest schemes of NHM which was Rashtriya Bal Swasthya Karyakram (RBSK). He further stated that technologies like Beneficiary Identification System (BIS) and Transaction Management System (TMS), both are thoroughly developed by NHA. He averred that ABDM is the most enterprising program in the history of not just healthcare but IT development also.

Detailing ABDM, he mentioned that it was designed via an interoperable platform, the first of its kind in the world which will be using individual universal health id that has been termed as the ABHA Id, which will be every Indian citizen’s license or passport for quality and better healthcare. The success of AADHAAR, AB-PMJAY, COWIN are testimonies to the attribute that technological solutions work in resolving the biggest challenge in healthcare.

He concluded by declaring that they are inviting investments from the private hospitals for enhancing the quality of healthcare. He added that their industries department are operating actively with their healthcare department for the opening of a large medicity, which is being planned in the Jammu and Kashmir division that will furnish the region with a state-of-the-art tertiary healthcare.