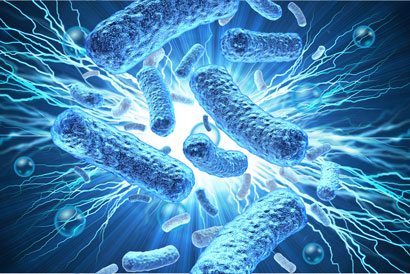 Application of a technology currently used to disinfect food products may help to get around one of the most challenging problems in medicine today, the proliferation of bacteria resistant to antibiotics and other antimicrobial drugs.

In a paper appearing in the June issue of the Journal Technology and already released online, investigators from the Massachusetts General Hospital (MGH) Center for Engineering in Medicine describe how the use of microsecond-pulsed, high-voltage non-thermal electric fields successfully killed resistant bacteria infecting experimentally induced burns in mice, reducing bacterial levels up to 10,000-fold.

Pulsed electrical field technology has the advantages of targeting numerous bacterial species and penetrating the full thickness of a wound, says Alexander Golberg, PhD, of the MGH Center for Engineering in Medicine (MGH-CEM), first author of the paper. This could lead to a completely new means of burn wound disinfection without using antibiotics, which can increase bacterial resistance.

About 500,000 individuals are treated for burn injuries in the U.S. each year. Standard burn treatment involves removal of burned tissue, skin grafts, and the application of antiseptic and antimicrobial dressings to prevent and treat infection. The growing prence of antibiotic-resistant bacteria “ including strains of Acinetobacter baumannii and Staphylococcus aureus “ is behind the frequent failure of antibiotic treatment, necessitating novel approaches to eliminate infecting pathogens.

Pulsed electrical fields (PEFs) have been used for decades to preserve food by destroying bacteria, presumably by causing the formation of large pores in the bacterial membrane; and more recently PEFs have been used to treat solid tumors. Members of the MGH research team, led by Martin Yarmush, MD, PhD, director of the MGH-CEM, have previously used PEF to study scarless skin regeneration and are currently investigating use of the technology to improve wound healing. Theorizing that the procedure could improve management of wound infection, the researchers designed the current study.

The investigators applied a multidrug resistant strain of A. baumannii to small third-degree burns that had been made on the backs of anesthetized mice. After 40 minutes, during which imaging of the fluorescent bacteria confirmed the established infection, the burned area was treated with an electrical field generated by placing the damaged skin between two electrodes. Each animal received two 40-pulse treatments five minutes apart, one group receiving 250 V/mm pulses and another receiving 500 V/mm pulses.

Images taken right after each treatment showed pronounced drops in bacterial levels. While images taken three hours later showed some bacterial regrowth, the overall results confirmed a persistent reduction in bacterial levels, ranging from a 500-fold reduction after 80 pulses at 250 V/mm volts to a more than 10,000-fold reduction after 80 pulses at 500 V/mm. The researchers also found that increasing the number of pulses per treatment had a greater effect on bacterial reduction than did increasing the strength of the electric field. Additional investigation is needed to confirm the safety of the tested voltage levels and the treatments effectiveness against deep infections and other species of resistant bacteria.

Currently available technologies have not been able to solve the problem of multidrug-resistant burn wound infections, and lasers are unable to treat infections deep within a wound because of the scattering and absorption of light, says Yarmush, who is senior author of the Technology paper. Pulsed electric fields are a previously unexplored technique that has the potential to provide a chemical-free way of disinfecting burns and other wound infections.