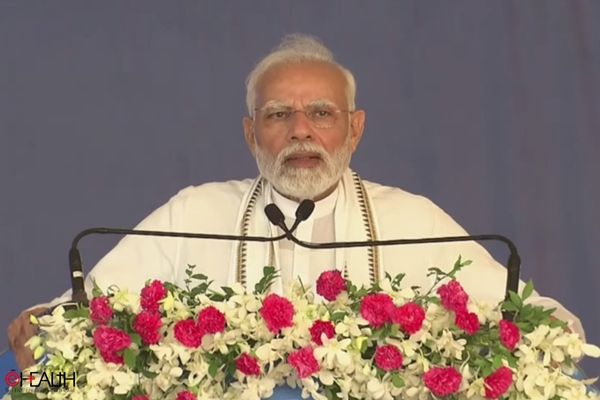 The Prime Minister interacted with patients in CHCs in Morva Hadaf, GMLRS Junagadh, and CHC Waghai.

Addressing the gathering, Prime Minister said that it is a huge day for health in Gujarat and congratulated everyone associated with these projects for completing them on time. He remarked that the most advanced medical technology in the world, improved benefits, and medical infrastructure will be made available to the public of Gujarat thereby benefitting the society. With the availability of these medical benefits, he informed that those who cannot afford private hospitals can now head to these government-run hospitals where medical teams will be deployed to serve with urgency. He also recalled that about three and a half years ago, he got the opportunity to inaugurate a maternal and child health super speciality hospital with a 1200-bed facility.

The Prime Minister noted that the capacity and services of the Institute of Kidney Diseases and U N Mehta Institute of Cardiology are also being expanded. Facilities like upgraded bone marrow transplants are also starting with the new building of Gujarat Cancer Research Institute. “This will be the first government hospital in the country where state-of-the-art technology like Cyber-Knife will be available”, he said.

Adding to that, he stated that Gujarat is rapidly scaling new heights of development. He pointed out, the pace of development is like that of Gujarat, the work and achievements are so much that it becomes difficult to even count them at times.

The Prime Minister listed the diseases of backwardness of the health sector, mismanaged education, scarcity of electricity, misadministration, and law and order issues dwelling upon the ills of the system in Gujarat 20-25 years ago. At the top of this was the biggest ill, that is, vote bank politics. He said today Gujarat is moving forward, leaving behind all those diseases. Today, regarding hi-tech hospitals, Gujarat stands at the top. When it comes to educational institutions, Gujarat has no match today. It is moving forward and scaling new trajectories of growth. Similarly, the water, electricity, and law and order situation in Gujarat have improved tremendously. “Today Sabka Saath, Sabka Vikas, Sabka Vishwas, and Sabka Prayas Government is working tirelessly for Gujarat”, Modi added.

The Prime Minister said that the health infrastructure projects that were unveiled have given a new identity to Gujarat and these projects are the symbols of the capabilities of the people of Gujarat. He also noted that along with good health facilities, the people of Gujarat will also feel a sense of pride that the world’s top medical facilities are now witnessing continuous growth in our own state. This will also contribute to the medical tourism potential of Gujarat.

The Prime Minister stressed that intentions and policies both need to be aligned for good health infrastructure. “If the heart and intention of the government are not filled with concern for the people’s problems, then the creation of suitable health infrastructure is not possible”, he said. The Prime Minister pointed out that when efforts are made wholeheartedly with a holistic approach, their results are equally multifaceted. “This is the success mantra of Gujarat”, he said.

Taking the analogy of medical science further, the Prime Minister said that he, as Chief Minister, applied ‘surgery’ i.e. weeding out old irrelevant systems with intention and force. Second ‘medicine’ i.e. ever-innovation for strengthening the system, third ‘Care’ i.e.working with sensitivity for developing the health system. He informed Gujarat was the first state to take care of animals also. He said given the nature of diseases and pandemics, One Earth One Health Mission needs to be strengthened. The Prime Minister pointed out that the government acted with care. “We went among the people, shared their plight”, he added. Reflecting on the efforts that were made by connecting people together through public participation, the Prime Minister said that when the system became healthy, the health sector of Gujarat also became healthy and Gujarat was being used as an example in the country.

The Prime Minister reiterated that he applied the learnings from Gujarat to the Central Government. He informed that in the last eight years, the Central Government has presented 22 new AIIMS in different parts of the country and Gujarat has also benefitted from this. “Gujarat got its first AIIMS in Rajkot”, Modi added. Reflecting on the work done in the health sector in Gujarat, the Prime Minister pointed out the day will not be far when Gujarat will excel in medical research, biotech research, and pharma research and make a name for itself on the global level.

The Prime Minister noted that when the government is sensitive, then it is society that reaps the biggest benefit including the weaker sections, as well as mothers and sisters. Recalling the time when infant mortality rate and maternal mortality rate were of grave concern to the state and the previous governments had blamed destiny for such unfortunate incidents, the Prime Minister interjected that it was our government that took a stand for our mothers and children. “In the last twenty years we drafted the required policies and put them into application that resulted in a drastic decline of the mortality rates,” he added. Throwing light on ‘Beti Bachao Beti Padhao Abhiyan’, the Prime Minister remarked that the number of girls being born has now surpassed the number of newborn boys. The Prime Minister attributed such successes to the policies of the Gujarat government such as ‘Chiranjeevi’ and ‘Khilkhilaahat’. He further stated that Gujarat’s success and efforts are showing the way to central government missi
ons like ‘Indradhanush’ and ‘Matru Vandana’.

Concluding the address, the Prime Minister pointed out schemes like Ayushman Bharat for the treatment of the poor and needy. Elaborating on the strength of the double-engine government, the Prime Minister said that the combination of Ayushman Bharat and Mukya Mantri AmritamYojna is serving the health needs of the poor in the state of Gujarat. “Health and Education are the only two sectors that decide the direction of the future, not just the present.” Giving the example of a civil hospital with a 1200-bed facility in 2019, the Prime Minister said that the same hospital emerged as the largest health centre and served the people during the Covid-19 pandemic that hit the world a year later. “That single health infrastructure saved the lives of thousands of patients during the pandemic”, he added.

The Prime Minister concluded by stressing the need to improve the present conditions as well as work for the future. “I wish that you and your families stay free from any diseases.”