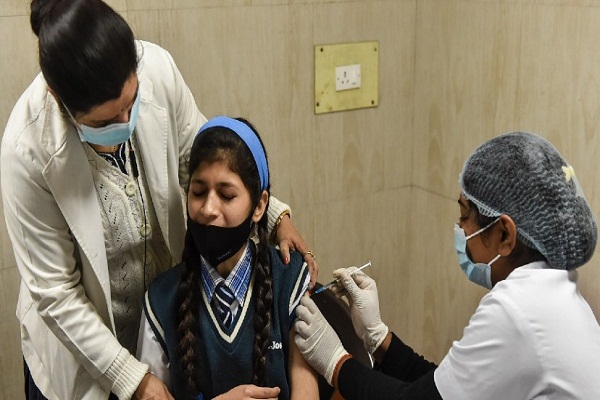 15.40 lakh children in the age group of 15 to 18 years will be administered the Covid vaccine in Haryana through the drive that began yesterday in the state. This was shared by Haryana Health Minister, Anil Vij in a virtual meeting of all states on ‘Covid review and Vaccination’ with the Union Health Minister Mansukh Mandaviya.

Day one of the drive saw 54,979 children in the age group of 15 to 18 years getting the vaccine administered of which the maximum number of children- 8062 children – were vaccinated in Panipat.

98 percent of the first dose and 70 percent of the second dose has been administered in the state of Haryana. The health minister stated that a lot of lessons have been learnt from the second wave which will further help in fighting this pandemic.

In the virtual meeting, Sh. Anil Vij informed the Union Health Minister that from January 1, 2022 a ban has been imposed on public places, offices, banquet halls, restaurants and other places in the state for those who have not got both doses of the Covid vaccine. This had a favorable effect and people queued up at the vaccination centres to get the vaccine. He said that taking lessons from the second wave of corona, it was decided that it would be mandatory to set up PSA plants in government and private hospitals with more than 50 beds. So far, PSA plants have been commissioned in 84 government hospitals. Similarly, 54 private hospitals have also set up plants. Efforts are being made to set up plants in the remaining hospitals soon so that Haryana can become completely self-sufficient in the matter of oxygen.

The Health Minister said that the state has all the medicines and adequate number of ventilators available now to fight the Covid pandemic. He said that except only one district in the state, RTPCR labs have been set up in all other districts and these labs have been made fully operational. He informed that Genome Sequencing Lab has also been set up in the state, which was started two days back. It is worth noting that at present more than 8 lakh Covaxin and more than 31 lakh Covishield vaccines are available in the state.