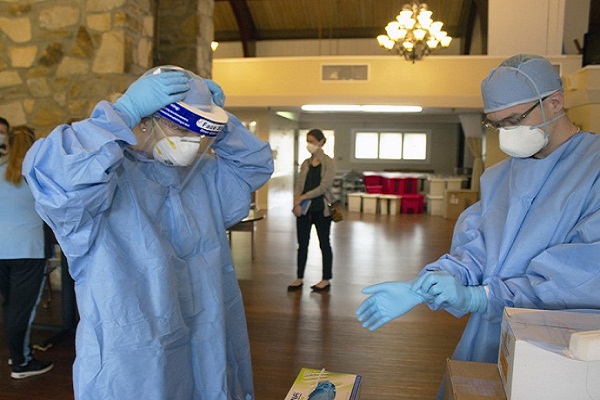 India’s journey to self-sufficiency started off successfully with the development of an indigenous supply chain for manufacturing high-quality PPEs and testing swabs. The success in transitioning from import-dependency for high quality PPE kits to becoming self-sufficient in 60 days and going a step ahead to becoming a manufacturing hub in a little over four months was discussed at a webinar, “A Movement Towards Atma nirbhar Bharat” addressed by Union Minister of Textiles Smriti Irani. Attended by stakeholders from the industry and institutions involved in this initiative, the session discussed a study prepared by the Institute for Competitiveness, a part of the Microeconomics of Competitiveness, affiliate network of Harvard Business School.

According to Textile Minister Smriti Irani, “The concerted efforts of the government, businesses and multiple stakeholders turned the PPE crisis into an opportunity for India. This successful journey has become an inspiration for other indigenous manufacturers, and the Atma Nirbhar Bharat mission is there to support these manufacturers to act on their aspirations. The way forward is for other sectors to replicate this success story. Even though the thrust on Aatma Nirbhar Bharat was necessitated by the health crisis, the success of PPE manufacturing has opened new doors for indigenous manufacturers in other industries as well.”

The study by Institute for Competitiveness states that the Ministry of Textiles turned the crisis into an opportunity to transform India into a global export hub of high-quality PPE kits. On 30th January 2020, when the first coronavirus case was reported in India, PPE kits including full body coveralls suitable for COVID-19 (classified as class-3 protection level under ISO 16603 Standard) were not manufactured in India. While countries began to limit their export of PPE kits, India was estimated to require more than 20 Million PPE Kits and 40 Million N-95 class masks by July 2020. Beating all odds, India developed an indigenous network of PPE fabric and garment manufacturers in just 60 days. By mid-May, India had the capacity to manufacture 4.5 lakhs pieces of body coveralls and 2.5 lakhs N-95 masks per day. Soo, India also began exporting PPE’s to the US, the UK, Senegal, Slovenia, and UAE.

Where we stand today

The study had suggested that India can become a leading exporter of high-quality PPE if domestic manufacturers imbibe the belief of “Quality comes First, Cost is Next”, and now, we can see them treading in that direction, too. The Indian version of the N-95 mask, the FFP2 aligns with the international quality standards i.e. N-95 (NIOS-USA) and FFP-2 (Europe). With such remarkable growth in both scale and adherence to quality, India’s PPE industry has garnered the attention of countries from all over the world, and improved India’s position in the global market.

Beginning of the journey

The successful transformation of the industry within months was the result of meticulous planning, hard work and coordination by the Ministry of Textiles (MoT) and the Ministry of Health and Family Welfare (MoHFW). Realising the implications of India’s high import dependency for India’s healthcare sector, the GoI had launched the “Go Local” initiative to turn this crisis into an opportunity to develop an indigenous supply chain for manufacturing class-3 PPEs and testing swabs. Accordingly, MoT was appointed in Feb 2020 to lead this initiative and set up the end to end value chain. As part of the planning process, the MoT and MoHFW undertook a joint study, which also involved textile and healthcare industry experts, industry associations and major manufacturing companies in India.

The South India Textile Research Association (SITRA) led the testing programme for domestically manufactured PPE kits during the pilot run in Mar-Apr 2020. Later, seven more government entities were approved as testing and certification labs for PPE Body Coveralls. These labs were strategically selected across different parts of India to ensure efficient testing of PPE kits across the country and to reduce the post-production timeframe involved in testing, clearance, and dispatch of the PPE kits.

After the pilot run, the next step was capacity building. Amidst the nationwide lockdown, the MoT and MoHFW also proceeded to scale up the initiative with the launch of “Operation PPE Coverall”. This stage of the journey was divided into five distinct categories namely development of supply chain, providing support for regulatory clearances and operational issues, facilitating inter-state logistics within India, enabling international coordination, logistics and customs, and lastly, providing 24*7 support to the stakeholders. A group of officers from the MoT was assigned to handle each of the five sets of activities, which involved tackling the operational, logistical and regulatory challenges that were especially heightened on account of the lockdown. Further, to speed up the process of capacity building, MoT adopted cluster-based approach, i.e., distribution of PPE manufacturers in small and medium clusters across different parts of India.

Developing an indigenous supply chain required the involvement of multiple stakeholders, and in the process, the government’s role was highlighted as that of a facilitator. The MoT and MoHFW demonstrated extraordinary leadership on the ground. One of the notable efforts made by the GoI was the constitution of an empowered committee to manage the operational challenges and for facilitating the availability of time-critical medical supplies. In addition, the Cabinet Secretary also monitored the various challenges and issues that came up and addressed them in a time-bound manner.

Textile Minister Smriti Irani remarked that there was a modicum of trust between government and industry, which made it a success. Crediting the industry for entrusting the government and rising to the challenge in a limited time, she added, “No one in the industry asked for a subsidy, nor the govt offered it. Another thing I’m proud of is that in a lockdown state, we have ensured 5 lakh sustainable direct jobs. That is the part of the PPE and testing swab revolution that has not been highlighted.”

According to Chairperson, Institute for Competitiveness, Amit Kapoor,“The success of the Indian PPE industry since the pandemic is a story of the empathetic view of capitalism. Both social objective and economic objectives were brought together in this endeavour. It is not just about job creation and making India productive in the long run but saving lives in the process.”

The exponential growth in PPE manufacturing has given hope for India to become an export powerhouse. To achieve that milestone, the Managing Director of Johnson & Johnson, Sandeep Makkar proposed a three-point agenda of establishing end-to-endvalue chain with a portfolio approach, preparing global stockpiles of PPEs as insurance, and maintaining globally harmonised quality and design standards. “We have the momentum on our side and now is the time to activate ecosystem partnerships. India as a powerhouse in PPEs and other speciality textile applications is possible,” he added. Executive Director of Arvind Ltd, Punit Lal bhai concurred:“To become the powerhouse, we need an ecosystem approach, which is now happening. It is not only important to become cost-competitive but also focus on quality.”

Secretary, Ministry of Textiles, Ravi Capoor explained how the government is aiding the industry in their efforts: “We are deliberately pushing the industry out of its comfort zone, and pushing them into man-made fibre and technical textile. We are creating an entire ecosystem through different schemes and removal of barriers in the supply of raw material, through a very facilitative textile policy, through setting up of a world-class lab in technical textile, and so on. So, a whole new textile ecosystem is starting to get implemented. If all goes well, India’s textile industry will hugely be kicking in a new direction in one to two years’ time.”