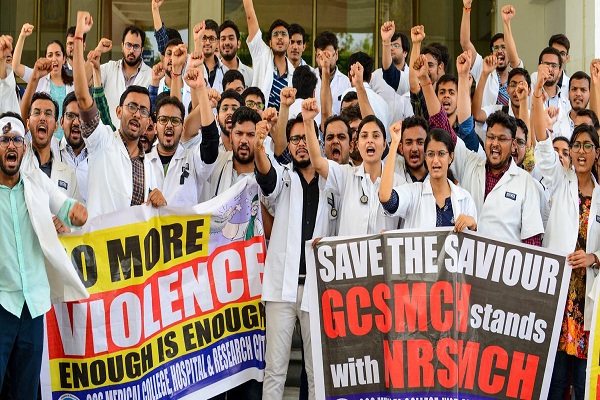 A seven day standoff due to strike by doctors in West Bengal came to an end after the State Chief Minister Mamata Banerjee agreed their demands late on Monday evening.

Reportedly, the truce was achieved after two hours of meeting where the Chief Minister gave them assurance of improved security.

“We extend our heartfelt gratitude to the CM (West Bengal Chief Minister Mamata Banerjee). After an enormous movement, the meeting and discussions with our CM met a logical end,” the doctors were quoted as saying.

In a bid to pacify the protesting doctors, Mamata agreed their demands including setting-up grievance redressal cell in government hospitals, deploying a nodal police officer in every hospital and directing officials to start a state-wide emergency number and email id to report an assault were some of the demands.

Doctors in West Bengal have been protesting since Tuesday last after two of their colleagues were attacked and seriously injured allegedly by relatives of a patient who died at the NRS Medical College and Hospital in Kolkata.

Showing solidarity with protesting doctors, the Indian Medical Association (IMA) held a nationwide doctors’ strike affecting healthcare services across the country. As many a times doctors’ are found to be at receiving end, IMA also demanded a comprehensive central law in dealing with the violence unleashed against the doctors.

Earlier on Friday, the Union Minister of Health and Family Welfare Harsh Vardhan asked the government to pass a law to make attacks on doctors a non-bailable offence.

“Heinous repeated attacks on doctors across India especially West Bengal have led to this situation. The government must pass a law to make any attack on doctors a non-bailable offence with minimum 12-year jail. Draconian Clinical Establishment Act that treats doctors as criminals must be withdrawn,” he tweeted.