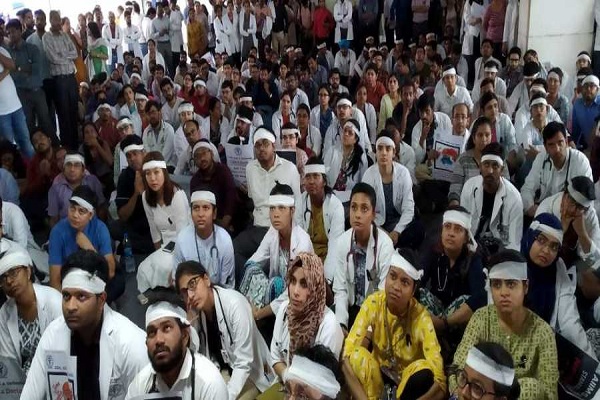 A few days after the physical assault on doctors in Kolkata, junior doctors from across the country joined hands in protests, demanding strict punishment for the offenders of the ongoing violence. Things became crucial after the Indian Medical Association (IMA) has asked members of all its state branches to stage protests and wear black badges on Friday.

In the wake of the protests, doctors from AIIMS, Safdarjung Hospital started working with bandages to work and decided to boycott from all non-emergency services today.

The protests and the suspension were made to condemn the violence and express unity with their protesting colleagues in Kolkata.

“There will be a complete shutdown of all outpatient departments (OPDs), routine operation theatre services and ward visits, except emergency services in the hospitals”, several medical bodies of the city have said.

Several resident doctors from the private and government hospitals also held a protest at Jantar Mantar against the attack on doctors.

“The AIIMS RDA condemns this in words and in spirit. Residents across the country are deeply hurt by these turn of events,” the RDA said in a statement.

Owing to the attacks, the government has miserably failed to provide any protection and justice to the doctors.

The Delhi Medical Association (DMA) observed a “Black Day” on Thursday against the brutal attack and has declared a statewide absolute shutdown today.

The DMA Executive stated, “The organisation is ready for an agitation to press for strong legislation and strict action against violence at hospitals.”

“The gruesome incident in NRS Medical College, Kolkata, is of barbaric nature. IMA condemns the violence perpetrated on a young doctor. The entire medical fraternity expresses solidarity with the resident doctors who are on strike. The IMA headquarters hereby declares All India Protest Day on Friday,” an IMA statement said.

Joining hands with IMA is The Federation of Resident Doctors’ Association; an umbrella body of resident doctors will also join the strike on Friday.

In the wake of the strike, the AIIMS has instituted contingency measures to take care of the admitted patients, including those in the ICUs and wards.

As part of contingency measures, OPD services will function in a restricted manner till normalcy is restored, according to a memo put out by AIIMS medical superintendent.

Following the strike, only the patients with prior appointments will be addressed in OPD and the emergency cases will be taken forward for surgical operations, it said.

Rest, the operation theatres will remain closed along with the diagnostics centres working in a restrictive manner, it added.

What has happened till now?

· A doctor in a government hospital in Kolkata was brutally beaten up by a patient’s relatives who died due to alleged negligence.

· This incident led to a serious agitation where the junior doctors of all the government hospitals went on a strike on Tuesday.

· Junior doctors said that the doctor was beaten up in the presence of cops, demanding an action on them.

· In the wake of the strike, patients broke open the gates to enter the hospitals, waiting to get treated.

· Heavy police force has been deployed at the hospital after the attack on the doctor.