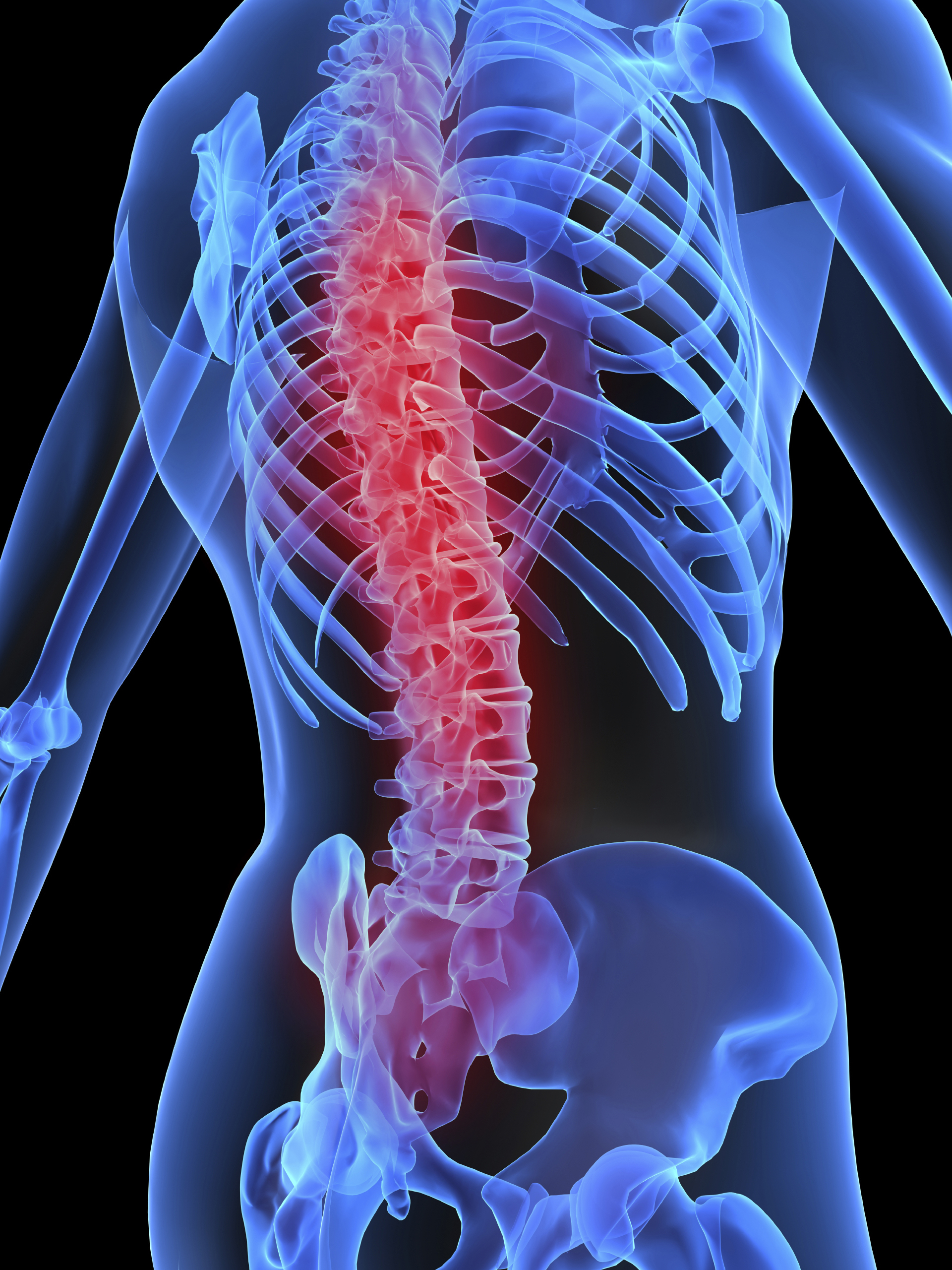 Since the 1960s, spinal cord stimulation (SCS) has been used to alleviate chronic back and leg pain. The process involves surgically implanting a series of electrodes, which are used to apply electrical potentials directly to the spine (Figure 1). Although approximately 30,000 such procedures are performed each year, there is still not a precise understanding of its mode of action. SCS somehow interferes with the human pain signaling circuitry. During the past 15 years, researchers have just been starting to develop a more detailed understanding of the effects of this stimulation. What makes the method attractive is that it is known to have beneficial results without many of the side effects of long-term pharmacological treatment.

One of the phenomena associated with this treatment is that it remains effective for many years, although over the course of time the stimulation generally has to be reprogrammed to modify the original parameters. As early as four to six weeks after the electrode is implanted, scarring occurs at the interface of the electrode and the surrounding tissue. Paradoxically, while this helps keep the paddle that holds the electrodes securely in place, it alters the electrical characteristics of the system, so thatthe stimulation has to be reprogrammed. The reprogramming is generally done by trial and error.

Research into this phenomenon was performed by Doctors Jeffrey Arle, a neurosurgeon with a degree in computational neuroscience; Jay Shils, who has a background in electrical engineering and computational neurophysiology; and Kris Carlson, Ph.D. who has expertise in programming and along with Dr. Shils, has become an expert in using COMSOL software. They are all with the Neuromodulation Group at Lahey Clinic in Burlington, MA, and have concluded a study based on the hypothesis that

the formation of relatively higher-resistance scar tissue alters the impedance seen by theimplanted electrodes, which in turn alters the pattern of the electric field distribution. It was their thesis that proved that a 3D mathematical model could be used to accuratelypredict these changes and define corrective modification of the stimulus pattern. Thiscould reverse the often-observed deterioration in the performance of the treatment.

Drawing on extensive earlier work done by their group, they had a great deal of data on precise measurements of the spinal cord segments, estimations of numbers of neurons, and the numbers of each type. They were also able to draw on detailed published work on the white matter (axons — the â€œwiringâ€ that carries signals from neurons in the spine up to the brain). Their plan was to store this data as a digital database so that it could be accessed and manipulated. This database was then used to build a 3D model of the spinal cord, one that is much more accurate than anything that had been done in the past.

The basic structure of the model was built using the SolidWorks CAD platform. The SolidWorks model could then be imported into COMSOL Multiphysics for solving some of the critical problems encountered with SCS (See Figure 2). â€œThe great advantage of COMSOL is that you can not only import CAD from SolidWorks, but you can subsequently make changes in these geometries, press a button, and these changes appear in the COMSOL model without losing any of the settings or material properties,â€ said Carlson. â€œThe LiveLink for SolidWorks really helped in streamlining the process.â€

The goal of this particular project was to examine to what extent scar formation affects the electrical field distribution between the electrodes and axons. This is important because the axons running through the spinal cord (the white matter) are either activated or not, based upon the strength of electrical stimulation, which is governed by the gradient of the potential field. This is significant because itâ€™s the axons that carry the pain control signals to the brain.

It was their goal to learn just how the implanted electrodes accomplished the treatment of the pain. So part of the process was modeling the circuitry in the spinal cord and the effects of the electricity on that circuitry. In order to get to that stage, they had to understand exactly what in the spinal cord actually gets stimulated â€” thatâ€™s where the COMSOL software came in â€” to â€œmodel the electric fields from the electrodes themselves and all of the tissue characteristics they pass through,â€ said Dr. Arle.

The spinal cord is essentially floating in cerebrospinal fluid (CSF), which is in turn surrounded by a tube-like membrane called the dura. The stimulating electrodes sit outside the dura, which is tough and electrically resistive. The different materials have very different conductivities, that of the dura being low and that of the CSF being a couple of orders of magnitude higher.

To study the electrical environment, the team used COMSOL Multiphysics to create a finite element model of the gray and white matter in the cord, dura, cerebrospinal fluid, epidural tissue, scar tissue, and stimulator electrodes. The gradients of the system are affected by the relative conductivities of these different materials.

One reason that an accurate model is required is that the potential field can vary along the z-axis of the spine. Itâ€™s possible that at one point, there isnâ€™t a high enough potential gradient to generate an activation potential at the neuron, while 0.5 mm or 1 mm away, you may have that critical gradient. These variations can occur for a number of different reasons: the electrode geometry is different; the material isnâ€™t uniform, for instance the dura itself might not be uniform across the cord; or there may be material such as scarring, which might make one area of the cord have a higher resistivity than another. There are also variations in the cerebrospinal fluid along different parts of the â€œUsing SolidWorks and COMSOL together made it very easy to change the geometry with SolidWorks and study the resulting changes in conductivities and permittivities with COMSOL,â€ said Dr. Shils. â€œThis means that the output of the simulation could be spatially added to a model that we have in-house of a neural network.This gives us a more accurate understanding of where the action potentials are occurring in the spinal cord and given some of the complexities, it was nice to be able to show that a little change in one place could really shift the energy gradient.â€

Carlson explained how the team uses simulation in their work. â€œWe decided to do very sophisticated geometry, much more so than anything that had been done in the past. Not only 3D as opposed to 2D, but a much more accurate profile of the spinal cord. In the model, we set all the material parameters; we can play with those â€” mainly the conductivities, and then the physics â€” we change the voltages, pulse widths, and frequencies of the various electrodes. So for the scar study that the two doctors designed a year or so ago, we have an incredibly sophisticated geometry. There are 64 differentpieces of scar and 64 electrode positions scattered on the surface of the spine and each ofthose is very easy to manipulate in COMSOL. Another great feature is that after we run the simulation, we perform a huge amount of post-processing. With the graphic features in COMSOL, we can run all different kinds of filtering criteria and also export the data and perform further post-processing in tools dedicated for the purpose.â€

â€œThe formation of scar tissue changes the playing field,â€ said Dr. Arle. â€œUsually, the programmer is left not knowing what the scar looks like exactly, and trying to move the stimulation around to get the best treatment for the patient. Now, by adding only a little bit to the model, we can begin to see the distortion of the electrical fields caused by the scar formationâ€ (See Figure 4). The procedure is proving to be extremely effective in immediately relieving pain once the programming is on target.

â€œItâ€™s very important that you understand what youâ€™re doing with COMSOL Multiphysics,â€ said Dr. Shils. â€œYou have to understand the physics of what youâ€™re using â€” why youâ€™re using a certain model as opposed to another. The way you choose the meshing, which COMSOL allows you to do with great flexibility and precision, is a critical part of the analysis. You choose the proper elements and then figure out what the edges are supposed to be. The next step is to choose the appropriate equations, starting points, and meshing. Mesh quality is of particular importance, especially around the curves of the axons, which is where most of the activation is located. If mesh resolution is inadequate, we could miss the high points of the field and gradients.â€

By importing COMSOL data showing which nerve fibers fired, into neural circuitry simulation software the group intends to unravel how SCS produces relief from pain. Dr. Arle summed up his feelings about the project. â€œIn biological systems in human anatomy and physiology systems, thereâ€™s not a huge amount of work done on this kind of thing as opposed to more engineering-based projects. You really need to understand the anatomy, the physiology, and the neuroscience, and then ramp this up to understand the mathematics and the physics. People are beginning to realize that you need to take this approach to really understand what weâ€™re doing.â€