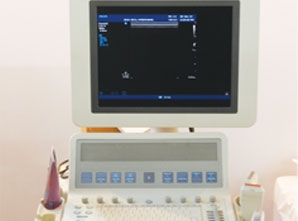 We are witnessing a huge rise in the popularity of non-invasive ultrasound procedures, as the techniques are fast and inexpensive. Armed with an array of impressive tools and techniques our ultrasound professionals are offering quality healthcare service to large numbers of patients

Ultrasound is now revealing its true colours. The journey from black and white to colour doppler system is now complete. A favourite tool for healthcare professionals, this diagnostic tool shows tremendous growth in spite of the economic downturn in foreign nations. The ultrasound market is segmented into three broad categories, black and white machines, colour doppler units and laptop systems. The market has acquired a large customer base. There is a movement towards the usage of miniaturised ultrasound probes and evolution of four-dimensional capabilities.

This equipment is now being used in various fields including obstetrics/gynaecology, surgeries and cardiology. Highest usage is in obstetrics/gynaecology. One of the cheapest diagnostic tools in the medical equipment industry, the installation of ultrasound systems has become a priority for hospitals. It is a great investment for hospitals. Pioneering technology advances through cardiac imaging to 4-D neonatal imaging in a portable ultrasound system to real-time image viewing. Ultrasound started its career from foetal imaging and today the technology is regarded as the best tool for foretelling the development of the foetus through myriad stages. During ultrasound uation, the foetus is completely safe from ionizing irradiation. The live-action 4-D technology offers 3-D views to enable physicians and sonographers have a closer view of foetal development.

The Indian ultrasound market is on a high growth path. It is expected to clock US$ 200 million by 2015 and is forecast to grow at a Compound Annual Growth Rate (CAGR) of 13 percent. With the advent of various schemes from the government, the reach of ultrasound can only rise. It is spreading across the healthcare market and making seminal contributions in the reduction of mortality and morbidity rates during pregnancy. The National Rural Health Mission initiative of the government makes use of ultrasound systems to promote safe pregnancy and motherhood.

Apart from the major players including GE Healthcare, Philips, Siemens, Sonosite, Mindray, Esoate Healthcare, Aloka Inc and Toshiba generating 70 percent of total market revenue market, a whole lot of companies are now venturing into the ultrasound sector with Samsung medicine and the industry also entertains companies which focuses on ultrasound applications for womens health in obstetrics, perinatology and so forth. The market majorly has Chinese and Korean manufacturers who import low-cost machines blended with latest technology. There are various technological trends taking place in the market and that includes fusion imaging, four-dimensional imaging, elastography and miniaturisation.

The radiation free technique has emerged profitable in terms of its versatility, advancements in technology and wider clinical application. Ultrasound market in India is valued at approximately `500 crore today. Colour Doppler segment sharing 90 percent of the total Indian ultrasound equipment market dominates with 13 percent growth in revenues with 3D and 4D imaging in cardiology and radiology. GE Healthcare has revolutionised ultrasound products with its new range of portable ultrasound system. It has worked to simplify ultrasound reporting and image management with its flexible and intuitive system. The solution provides the ability to integrate ultrasound with HIS, RIS, EMR and PACS systems, and communicate across departments, hospitals and enterprises to help reduce dictation and transcription. It is possible to utilize 4D view for offline processing and creating preliminary and final reports easily using new quick reports templates.

Dr Rajesh Kapur, Vice President, IRIA, opines, New additions in radiology are the contrast feature in ultrasound which was earlier seen only in MRI and now we see in ultrasound as it can pick up infection with greater degree of confidence. Ultrasound equipments need to be registered with the authorities before use. There are 35,000 systems registered so far which are catering to more than a million people along with unregistered systems further gratifying the whole country. He believes, Today ultrasound gives a clearer view of the body parts which further help in monitoring and developing treatments for conventional surgeries.

Sonosite has introduced a suite of specialised products for point-of-care visualisation in medicine with brilliant image quality and simplified controls that enable clinicians to focus in on their target areas in a matter of seconds. For overall improved detail and contrast resolution, the EDGE ultrasound system is engineered with new proprietary imaging algorithms that reduce speckle noise. The system also boasts a high luminance LED, high resolution 12 inch display, making it easier for clinicians to see the ultrasound image from across the bed during procedures. Philips offers an innovative product with superb image quality and sophisticated workflow solutions that helps in healthcare through the eye of radiowaves including technologies such as Xmatrix and HD 15 ultrasound systems. Soft tissue navigation, instrument tracking, image fusion, increased visualization during catheter-based procedures, transesophageal imaging, and sophisticated quantification is creating a mark in the industry. In combination with their comprehensive suite of elastography applications, Siemens highlighted its new strain imaging application Virtual Touch tissue IQ imaging, reinforcing the companys role as a leader in strain elastography imaging last year. The new ultra-premium ACUSON S3000 ultrasound system advances Siemens pioneering ultrasound technologies with its proprietary eSie Fusion imaging, which enables the automatic fusion of 3-D computed tomography (CT) volumes with real-time ultrasound via a single click. Current fusion techniques require time-consuming manual registration of CT or magnetic resonance (MR) images. They also require the patient to lie motionless throughout the entire exam to avoid elaborate manual realignments.

Focused ultrasound (FUS) could be the ultimate form of non-invasive surgery to destroy tumours without making any incisions and without harm to other organs. It can replace the need for most radiation treatments and transform pharmacological therapy by delivering drugs precisely where needed without harm to the rest of the body. It can also dissolve blood clots and restore flow through blocked vessels. Just like a converging beam of light, converging radiowaves can concentrate up to 1000 intersecting beams of ultrasound energy with extreme precision on a target deep in the body as small as 1 mm in diameter and thereby treat the tissue.

Ultrasound can also be useful in cardiology providing a tomographic orientation of coronary arteries and offer qualitative information on plaque composition and response to interventional strategies. The frequency of the ultrasound used is typically centred at 12.5 – 50 MHz. Researchers are exploring new and creative areas of IVUS with Doppler capabilities to allow for simultaneous hemodynamic assessment of the stenosis. Continued improvements in transducer design and technology will allow for better resolution and penetration of ultrasound waves.

Dr Devlina Chakravarty says, Interventional radiology is the need of the hour today because so many procedures require diagnosis of the disease initially and then radiology equipments including ultrasound can now be of therapeutic use in some cases. It thus provides a simplistic, cost effective model of treatment leading to lower mortality and morbidity rate.

Neurosurgery is at an experimental stage and this may further help in treating cancerous cells with an integrated special MRT treatment table acting as a probe head whose sound waves can melt tissue with precision at specific points. A local temperature of 60 to 80 degrees Celsius is created, thereby melting the myoma but sparing the surrounding tissue. The therapeutic use of ultrasound is now being done to remove excess subcutaneous fatty tissue using high-energy sound waves which is a bloodless and anaesthetic-free procedure.

Although the spread of ultrasound technology is not the root cause of increase in incidences of female foeticide, the compact, portable and relatively low-cost nature of this technology does increase the complexity of administratively overseeing and prosecuting medical practitioners, companies or other individuals who misuse the technology to assist in sex-selective abortions. With booming population, and increased awareness about the portable ultrasound systems, there has been an increase in the misinterpretation of the Pre-Natal Diagnostics Techniques (PNDT) Act. Manufacturers must confirm that their customers have valid PNDT certificates and have signed affidavits stating that the equipment shall not be used for sex determination. Given the multiple uses for ultrasound in obstetrics and gynecology, restricting access to the technology would conflict with the human rights goal of reaching the highest standards of health. The market today is witnessing increased competition and lack of awareness.

The ultrasound industry has advanced to incredible heights, not only as a diagnostic tool, but also as a therapeutic device to become a more engrained part of the cancer industry. From a sole practice of ensuring babys health in the womb, ultrasound shows great potential in the healthcare industry. With unlimited use in healthcare, the demand for the latest ultrasound trends is literally changing with the seasons.

The healthcare industry is facing deficit of trained professionals especially in the field of radiology. The misuse of the technology can lead to punishment, as per the PNDT act. Any newcomer from college cannot use such machines. Requisite permission is needed for using such equipments and certified PNDT act. Today, the process of certification is very strict, even if the radiologist is experienced. The vendors are thus facing a shortage of certified and trained technicians in the industry. Policies are now becoming stringent when it comes to monitoring medical equipments such as ultrasound since the State governments would be now responsible for monitoring the disposed ultrasound machines. The use of unregistered machines will lead to a three-year jail term with a fine of up to `50,000. The fee for registration of the machines has increased substantially. MCI now accounts for registration and cancellation of doctors convicted under the Act. The Ministry had appointed a nodal officer to coordinate issues relating to the implementation of the Act. Portable ultrasound machines were banned, except those in hospitals and mobile-care units of the National Rural Health Mission.

As the country travels on the path of economic reforms and prosperity, there is demand for quality healthcare. Quality healthcare needs installation of top class ultrasound facilities. Hence we can rest assured that the industry will remain on a high growth path for a long time to come.