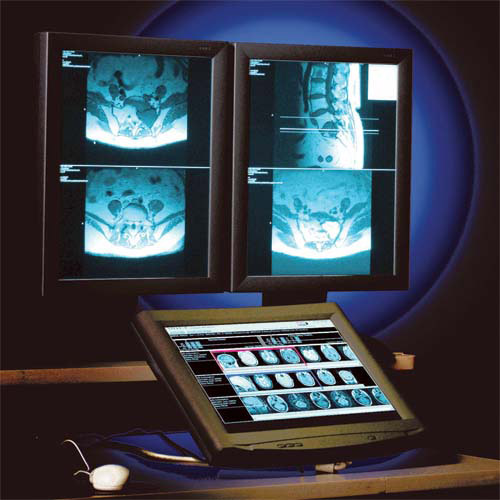 Because of its capability of optimising each function of radiographic imaging, digital imaging poses as a technological improvement over analogue film imaging

The empires of the future are the empires of the mind, said Winston Churchill. If anything, the advent of digital and computed radiography, which has miraculous potential in radiology, is a prime example of a beneficent empire conjured by the labours of the mind. Hence if we take a leaf out of Churchills words of wisdom, we can say that such digital techniques are also the empire of the future.

Digital radiology is one of the greatest technological advancements in medical imaging during the last decade. The use of radiographic films in x-ray imaging might become obsolete in a few years. Digital radiology provides enormous benefits. It can make a radiological facility or department filmless. The referring physician can view the requested image on a desktop or a personal computer and in most cases submit his report in just a few minutes after the examination has been performed. The images are no longer held in a single location, they can be seen simultaneously by physicians who are kilometres apart. In addition, the patient can have the x ray images on a compact disk to take to another physician or hospital.

As per the views of Krishan Prasad, President, Prognosys Medical Systems Pvt Ltd

Computerised radiography is a digital imaging science that uses photostimulable phosphors to create images rather than photographic screens and film. In this module we will discuss the characteristics of these phosphors, and how CR images are formed as well as discuss the various components of the computed radiography system.

Computed Radiography uses standard X-Ray machines. There is no need to change existing X-Ray machines as is required in digital radiology. In CR rather than a film, the image is exposed on a digital plate. The digital image is then transferred to a reader, where the image is displayed on a monitor. This image being digital can be modified to adjust the exposure. Once the quality is approved the image may be printed on film in a laser camera. The images may also be stored in an electronic format on CD or sent to a remote location in the hospital via a local area network or even emailed to any location in the city, country or world. The images may also be transferred to a workstation similar to a CT or MRI workstation.

Conventional X-Rays are still a manual procedure; the technician sets the exposure depending on the size of the patient. Sometimes, this could be faulty resulting in an over or under exposure. When this occurs it will need to be corrected by repeating the X-Ray after readjusting the exposure factors. Such retake results in additional radiation to the patient as well as loss to the institution, as the first film will need to be discarded.

With Digital X-Rays the exposure factors do not need to be so accurate, variations in exposure can be adjusted on the monitor after the image has been obtained. Thus a perfect image can then be printed.

Spoil film rates range from 10-15 percent, similar to most top class institutions obtaining X-Rays using conventional means. Digital techniques will result in a saving of 10-15 percent on the film bill. Occasionally in very busy departments films may get misplaced. These films need to be repeated, again resulting in additional radiation exposure and loss of revenue. Images can be documented on CD, high quality paper or viewed on a monitor. The benefit of this is as film is an expensive medium; cheaper options to cut cost can be explored.

Kalorama Information estimates that digital x-ray system sales will exceed those of traditional x-ray systems used for a medical (non-dental) purpose in 2011. According to the healthcare market research publisher, revenues for digital x-ray systems are the largest component of the US $12 billion radiography market, slightly higher than the firms projection for traditional systems. The report states that it is initially expensive to purchase a digital x-ray system such as the Philips DigitalDiagnost, the Siemens AXIOM Multix, or products from several other companies. But with continued use, operating costs are lower than standard radiography. Digital systems dont require film and processing, the annual cost of which can be as great as the capital cost of standard radiographic equipment. Once a digital system is installed, large film storage facilities are no longer needed.

Technavios analysts forecast the global digital radiography market to grow at a CAGR of 3.3 percent over the period 2010“2014. Key vendors dominating this market include Philips Healthcare, GE Healthcare, and Siemens Healthcare.

The report, which covers the Americas as well as the APAC region, also covers the current landscape and growth prospects of the global market for high-end digital radiography equipment. The report also includes a discussion on the key vendors operating in this market.

The process of enhancing the raw image data is called image segmentation. The CR image is acquired over four decades of exposure, light release from storage phosphors, conversion to an electronic signal by the PMT tube, identifying the collimated image border, and tone scaling the image. These are the post processing functions that must take place before the image is presented on the CR reader monitor. The image must then be fixed before the data is sent to PACS, to the workstations, or is printed. The raw data is subjected to various algorithms and LUT that define areas of interest and collimated areas. The average density and LUT control the overall density and contrast of an image. The final image is first available on the CRT monitor at the reader or on remote operator panels (ROP). What is important for the technologist to understand is that the image released from stimulating the phosphor plate is not a readable diagnostic image and requires post processing. Specific software algorithms must be applied to the image prior to presenting it as a finished radiograph. These modifications of the image occur in the reader programmes and at the workstation using look-up tables as references. Depending on the workload and the type of x-ray room space available, one can choose the ideal DR set up. If the x-ray workload is about 100 x-rays per day or lower, one can choose a single detector solution. There are three types of solutions available: Universal or U-Arm DR system: This is a single detector solution with the x-ray source (Tube “ Collimator) on one side and the FPD on the other, Floor Mounted DR system: The floor mounted systems are more like conventional x-ray systems, Ceiling mounted units: Ceiling mounted solutions are available in Single or Dual detector combinations.

A characteristic that is unique to CR imaging is that there is only one screen type for all studies so that the same cassette is used for portable radiography, bucky radiography, tabletop radiography, and other such systems. There is no need to look for special detailed cassettes for extremity work, or high speed screen with low scale contrast for chest radiography. These functions are handled by the software performing algorithm functions. Even the grid lines commonly seen with screen-film imaging can be removed from the digital image using LUT for that specific function.

Computerised x-ray is not unique to radiography; it is used throughout the scientific community in areas like molecular biology and chemistry for autoradiography and pulsed-field gel electrophoresis. Its wide spread use is due to the sensitivity of photostimulable phosphors and improvements in light detector technology. Modern detectors can differentiate light emission by photostimulation for electromagnetic radiation exposures of slightly greater than 100 milliroentgen (mR), and as low as 0.195 alpha particles per square millimeter equivalency for particulate radiation. This makes photostimulable phosphor technology a very useful and powerful tool in resolving radiation patterns traditionally captured in radiographic film from X-ray diffraction, protein crystallography, and electron microscopy techniques.