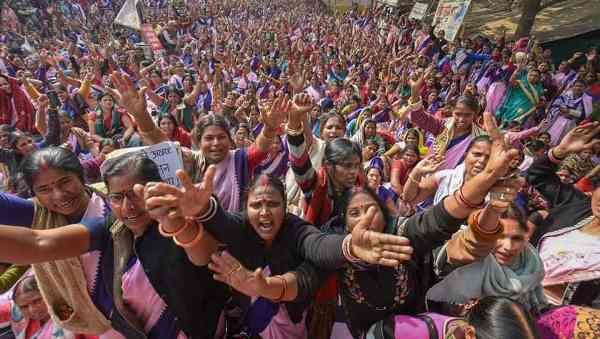 Few days after he took an oath as the Chief Minister of Andhra Pradesh, Y S Jagan Mohan Reddy on Monday announced an increase in the salaries of Accredited Social Health Activist (Asha) workers from Rs 3000 to Rs 10,000.

This was a promise made by YSRCP, during the election campaign to increase the salaries of Asha workers.

Commenting on this move, Jagan said that the government was determined to revamp the medical and health department to improve health facilities in government hospitals.

As promised in YSRCP manifesto, Jagan said, “The government would restore the past glory of 108 ambulance services introduced during former Chief Minister Y.S. Rajasekhara Reddy’s regime.”

Going by the prevailing condition in government hospitals, Jagan was worried over the same and hence formed a committee to refurbish the medical and health department and had asked for the report in the next 45 days.

In his speech as the Chief Minister of Andhra Pradesh, Jagan mentioned his two main focus areas of concern, namely a corruption free government and providing jobs to the unemployed youth in the state. Also, during his election campaign, he had promised to look on the Navaratnalu (Nine Gems) welfare schemes.

Last week, Chief Minister Jagan has also asked officials to shut ‘belt shops’ or illegal outlets of licensed liquor shops in the state. He said, “Stringent action should be taken against those running such shops, and directed officials to cancel the license of dealers running the illegal outlets.” It was considered as a first step towards imposing prohibition in Andhra Pradesh.

Accredited Social Health Activist (Asha) is a female community of health activists which acts as an association between the community and the health system to have an easy access of the health care. At present there are over 9 lakh ASHAs. The ASHA scheme is presently in place in 33 states.