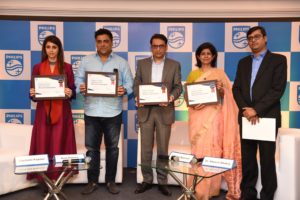 This is the first time in India that actors are coming forward to be a part of a sleep ailment like sleep apnea.

I am glad to be associated with Philips in building awareness around sleep apnea in India. After learning that sleep disorders can lead to serious medical conditions, I realised that it was imperative for people to understand the importance of good and healthy sleep. Gautami and I hope to make significant impact on the lives of people by making them more informed about this ailment, said actor Ram Kapoor.

Currently, over 91 million people in India are suspected to be suffering from sleep apnea and a significant number of people are unaware of their condition.

Owing to our busy lifestyles and hectic schedule, we avoid taking care of ourselves and health takes a backseat,” he said, adding, “I am happy that Philips has acknowledged the issues and is working towards raising awareness around sleep apnea.

Philips has worked extensively in this field and we are excited to be associating ourselves with eminent actors like Ram and Gautami Kapoor. Reiterating its commitment, Philips setup over 500 sleep labs throughout the country and about 70 in Maharashtra itself,” said Priyank Aggarwal, Head of Strategy and Direct 2 Patient Businesses, Philips India.

The company is committed to providing the means to lead a healthy lifestyle and improve quality of life. It has also trained over 400 sleep technicians in India, he added.

In India, 93% of the population is sleep-deprived, but only 2% Indian discuss their sleep issues with physicians. Statistics reveal that OSA in Indian males varied from 4.4% to 19.7% while amongst females it ranged from 2.5% to 7.4%.

In context to OSAs prence in different age groups, the elderly have been observed to have high snoring and high excessive daytime sleepiness (EDS) with 27% being habitual snorers. OSA is also correlated with heart failure which is 12-16% more prent in OSA patients. It has also been observed that approximately 60-70% of OSA patients are obese.