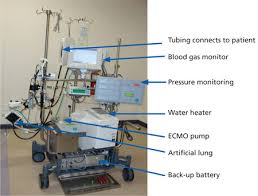 The advances in critical care and improvements in life support systems such as mechanical ventilator and hemodialysis have resulted in patients surviving multi-organ dysfunction. These devices act as a bridge to maintain organ function till the body organs show recovery.

Jayalalithas recent sudden demise has surely resulted in a vacuum in Indian political arena and a sudden spurt in nationwide interest in a device popularly known as ECMO. Though people at large are aware of the role of ventilators in critical care, ECMO is not so widely known.

Dr Arun Sharma, Critical Care Department, Fortis, Mohali explains, Extra corporeal membrane oxygenation, popularly known as ECMO is a device capable of providing both cardiac and respiratory support to a person whose heart and lungs are unable to maintain circulation and gas exchange to sustain life.

The word Extracorporeal literarily refers to blood circulating outside the body with the help of a machine. Membrane oxygenation needs to be interpreted as a specialized component of the circuit, which takes on the function of our lungs, by supplementing oxygen to the blood and removing carbon dioxide. “

The ECMO machine thus has two parts — a pump that works like the heart and an oxygenator that works like an artificial lung. The heart pump receives blood with low oxygen out of the body through small tubes called catheters. These tubes are placed under anesthesia in large arteries and veins in the neck, chest or the groin. The blood is subsequently pushed through the oxygenator, enriched with desired gases and pumped back to the heart.”

Says Dr A Sharma, The commonly used indications for this machine are respiratory failure, caused by severe pneumonia (infection of the lungs) and heart failure (Heart cannot pump enough blood to the body), which can occur after a heart attack. It is increasingly being used to support people with end stage heart and lung disease while they wait for heart and /or lung transplant. Another extension of the use of this equipment is E-CPR (Extracorporeal CPR). This refers to institution of ECMO to provide immediate cardiovascular support for patients who have cardiac arrest unresponsive to conventional CPR measures.”

Patient on ECMO are managed in specialized Intensive care unit where the vital parameters are constantly monitored. The patients are given blood thinners to ensure that the blood does not clot. The unstable patients are kept sedated to keep them comfortable. As the clinical condition stabilises, they can stay awake and even communicate by gestures or verbalize depending upon the clinical status.

ECMO does not heal the heart or lungs, but allows time for them to rest and recover. As these organs regain their normal function, the support of ECMO is gradually removed.

The technology does have its inherent risks, which includes bleeding related to the blood thinners, infections requiring antibiotics. There is also a risk of stroke and ischemic injury to the limbs.