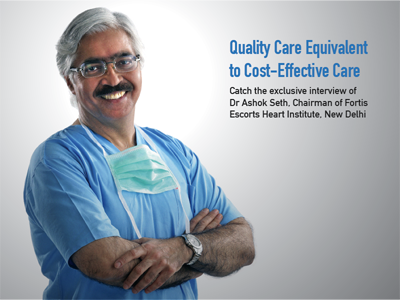 The government should be encouraged to create manufacturing and research ecosystems to give the best advantages to those interested, shares Dr Ashok Seth, Chairman of Fortis Escorts Heart Institute, New Delhi and Head, Cardiology Council of Fortis Group of Hospitals in an exclusive interview with Kusum Kumari and Jaya Lakshmi of Elets News Network (ENN)

Sir, with your wide experience as a super specialist, you have witnessed all kind of advancements. So, now that we are in the stage where gene therapy and robotic surgery are coming to India, what are your observations?

In the last 30 to 40 years, the science and technology advancements, especially in the medical field and more so in the cardiology field, have been massive. Science and technology has progressed like never before in the last 2,000 centuries, as in the 20th century. Medical science has grown in the last 50 years. In brief, we have transformed care in the last 30 years, offering more treatment of disorders; however, we have, of course, not found cure for disorders, rather have found only palliations. Overall, we have succeeded in ensuring longer lives. However, we still have not found how to absolutely say that I have treated you and you will never have coronary heart disease or develop blockage again.

In another 1,000 years, we might conquer many of these challenges; in this century for certain we are not going to conquer many diseases, but only have better therapies. As such, treatment has improved significantly, such as minimally invasive surgery, and we now have loads of equipment, which is phenomenal.

In the last 15 years, I have been the core part of numerous pioneering technologies, such as replacement of valve of the heart without cutting the heart open through catheters, which was for the first time ever done in Fortis Escorts Heart Institute in the world in 2014. It subsequently became an established procedure worldwide, with 150,000 implants conducted so far. Therefore, things that were unimaginable in 2000 have now become the standard care practice in 2016. The time span of innovation is reducing because people know that innovation actually helps to save lives. However, medical expertise still cannot be replaced, which is the vital aspect. Therefore, clinical acumen, compassion, ethics, expertise and focus of the medical profession combined with any of these advancements of technologies is what delivers the best for the patients. As such, technology will assist in improving the results, make procedures less painful (less of cuts, rapid recovery and more minimally invasive) and ensure cost effective quality care.

Quality care by the way relates to providing very cost-effective healthcare and not necessary high technology.

Gene therapy, which changes chromosomes and therefore transforms the disease process can have a great impact, but the cost involved is huge. Any therapy besides being useful should also be cost-effective.

What are your key concerns and recommendations for the Indian healthcare? The opportunities in India are phenomenal, as obviously we have got 1.2 billion people to treat. We cannot have innovations for the few who are rich and can pay for it. Every time a new technology comes to me or I pioneer a new technology which costs twice, supposing its a new stent, such as I was integral part of the creation and putting into research and practice of dissolvable stents, and my biggest concern was that if it is going to be available only to few rich people at the twice the cost of a normal stent, then I don’t think I have done justice to healthcare, because at the end of the day it is only valuable if it is transferred down, not necessarily to all the people but at least to a significant portion of the people at a highly subsidised cost. Therefore, everything which we have to think of in terms of healthcare has to be cost-effective. This is the reason I love the idea of start-ups. For me, the value of a start-up is that its offerings should be applicable and capable of altering the life of a large number of people.

My biggest problem is that we still have not built up ways to promote innovation in terms of funding. Research and science should start in the medical colleges. Our medical colleges have no curriculum about research and science. Thats sad because minds should start working around healthcare delivery in an appropriate manner through innovation right from the beginning. It needs to be in-built in the system and encouraged. This will make people think much ahead. We should have more of innovation centres. Its only in the last 5 years that we have seen innovation incubators. More number of people should be able to access these incubators. Innovation should become the agenda of the country and a habit. Youngsters should create and innovate not just for the sake of livelihood and financial rewards, but for the sake of ensuring benefits to a large number of people.

We see a lot of start-ups offering software-driven Internet platforms, as they overcome technical manufacturing issues. However, innovations in hardware are less. But, remember its the hardware also that treat heart disease; therefore, it needs to be researched, created, developed and finally got to be implemented. A lot of hardware is required when we go for super specialised care, but when we go for preventive and commentary care a lot of m-health and e-health platforms are required.

Please throw light on the procedures initiated by you that have been institutionalised in the medical fraternity.

Two of the most recent procedures that I was talking about include percutaneous valve change through non-surgical route and the first implant ever done in the world was at Fortis Escorts Heart Institute, which we are doing so regularly. Its the innovation which was of course started by a French surgeon, but the first implant was done by us. As they come at a cost, the growth of percutaneous valve replacement though needed by many people has not been at the same extent as in the developed countries where it has become standard procedures. Same thing goes for the dissolvable stents, which has been the fourth revolution of angioplasty that goes beyond the medicated stents which we used to talk about. I have been integral part of the development of dissolvable for the last 8 years for research and science, trials and approvals in India. I have helped numerous countries to learn it. I have written on it and in fact I was in the Food and Drug Administration (FDA) panel for its approval in the United States (US), where my experience was sought of, which has been never done by any Indian before. With the cost involved, these technologies are able to target just 20 to 30 per cent of people. Many of these technologies and advancements in science once approved are coming at a higher cost commercially, as the final cost does not take into account not the manufacturing cost but the amount spent on development, research science and trials. We need to promote the development of science, technology and research in India, only then we can hope to deliver solutions to the public at a lower cost.

One such example in the context of India is the dis-solvable stent, as currently I am researching on the Indian dis-solvable stent, which is unique as theres just one approved dis-solvable stent across the world by an American multinational company which is good and bought up, and the another dis-solvable stent that has seen the light of the day is made by an Indian company. Interestingly, we have finished the study and investigations, and we are now conducting follow-ups. By the end of this year, we will have the results of follow-ups, and if the results are great, then hopefully we will have the second stent by an Indian company, which would be half the cost with indigenous technology. Thats the way we need to move forward.

The government should be encouraged to create manufacturing and research ecosystems to give the best advantages to those interested. Luckily, things are improving in the last one and a half years, with Innovation Council and Industrial Council being set up. However, I still say that better may not be good enough, as we need to create single window clearance, an entrepreneur council, etc.

Sir, how do you rate our pace of innovation at the global level?

Our pace of software innovation is very high, but our pace of hardware innovation is poor. With regard to hardware, new innovation centres have come up by companies, such as GE, Philips, Tata, etc. They are looking into the potential of the Indian companies manufacturing stents and devices and other platforms. One of the innovations that we have come up using all these electronic and digital innovations is setting up electronic intensive care units (e-ICUs), which aim at delivering quality care using low-cost innovations. It ensures real time monitoring of critical care patients in faraway areas and hospitals, despite an absolute dearth of good critical care specialists. We have developed this platform along with GE and of course now with other vendors have worked according to it 3 years ago, we are now conducting real time monitoring of 400 beds from this site across numerous cities to right up to Bangladesh. We monitor their critical care units and vitals of each and every patient.

We are able to advise and discuss vitals of each patient with nurses twice a day; we have saved lives and we have transformed antibiotics usage, which is a stumbling block across the world. We want this model to grow and it costs only $120,000 dollar to establish, but to a centre it costs less than $8, no more than Rs 500 per day per bed as an expense to have a patient. The other way it changes things that the patient does not need to be transported to bigger cities with relatives. Its so defining for the moment that if this platform is being expanded to 500 beds and has been rewarded and written extensively. We have done it at the 1/8th cost of what GE would have been in the United States. We did it as part of healthcare delivery with GE and Philips.

I do see that because that’s how it worked in the west. The west runs on that. Every technology that has come out has come out through partnerships between the medical device industries, clinicians and scientists. It has to be partnerships fueled all the time by the government. Without such partnerships, no innovation will take place. Academic centres and government agencies should encourage such partnerships. We can no longer afford to have these verticals functioning in an isolated manner. There should be collaboration among these verticals to ensure knowledge sharing, work efficiency, etc. This enables identification of the key areas. We need to have a team of brains in any part of the technology and delivery. However, this team should have an encouraging ecosystem. Unfortunately, the Indian approval system is not so robust in approving medical devices.

The Adoption of Cloud is a Game-Changer in Healthcare

“Artificial Intelligence is preparing the pharmaceutical sector for the future”