The Rashtriya Swasthya Bima Yojana (RSBY) has witnessed unprecedented growth. It is now being heralded as the largest open health insurance programme, not only in India but also worldwide 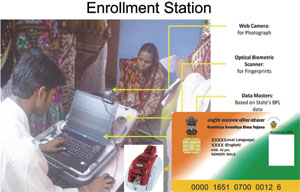 India is rapidly transitioning from a large, rural and agriculture-based economy to a modern, entrepreneurial, economy, which is ready to take a place of pride in the community of worlds leading nations. The advent of an array of latest communication technologies ensure that the transformation is widely visible to our entire population, whether they are part of the growth story or not.

As the nation grows, there are new demands for better healthcare services. Over the years, the government has substantially changed the strategy by which it seeks to achieve the goal of universal healthcare. The Indian state has started focussing less on direct interventions; the concentration is on developing initiatives that are use modern technology and at times private capital to bring benefits to the people.

Rather than provide healthcare solely through the government-run Primary Health Centres, the state is implementing the Rashtriya Swasthya Bima Yojana, which allows the poor to receive healthcare from recognised private as well as government hospitals.

RSBY has been launched by Ministry of Labour and Employment, Government of India, to provide health insurance coverage for Below Poverty Line (BPL) families. The objective of RSBY is to provide protection to BPL households from financial liabilities arising out of health shocks that involve hospitalisation. Beneficiaries under RSBY are entitled to hospitalisation coverage up to Rs 30,000/- for most of the diseases that require hospitalisation. Government has even fixed the package rates for the hospitals for a large number of interventions. Pre-existing conditions are covered from day one and there is no age limit. Coverage extends to five members of the family, which includes the head of household, spouse and up to three dependents. Beneficiaries need to pay only Rs 30/- as registration fee while Central and State Governments pay the premium to the insurer selected by the State Government on the basis of a competitive bidding.

RSBY provides the participating BPL households with freedom of choice, between public and private hospitals. Thus the BPL households become a potential client worth attracting on account of the significant revenues that hospitals stand to earn through the scheme. The scheme has been designed as a business model for a social sector with incentives built for each stakeholder.

The insurer is paid premium for each household enrolled for RSBY. Hence, the insurer has the motivation to enrol as many households as possible from the BPL list. This will result in better coverage of targeted beneficiaries. A hospital has the incentive to provide treatment to large number of beneficiaries, as it is paid per beneficiary treated. Even public hospitals have the incentive to treat beneficiaries under RSBY, as the money from the insurer will flow directly to the concerned public hospital which they can use for their own purposes. Insurers, in contrast, will monitor participating hospitals in order to prevent unnecessary procedures or fraud resulting in excessive claims.

The key feature of RSBY is that a beneficiary who has been enrolled in a particular district will be able to use his/ her smart card in any RSBY empanelled hospital across India. This makes the scheme truly unique and beneficial to the poor families that migrate from one place to the other. Cards can also be split for migrant workers to carry a share of the coverage with them separately.

RSBY is evolving a robust monitoring and uation system. An elaborate backend data management system, which can track any transaction across India and provide periodic analytical reports, is being put in place. The basic information gathered by government and reported publicly should allow for mid-course improvements in the scheme. It may also contribute to competition during subsequent tendering processes with the insurers by disseminating the data and reports.

RSBY is being pushed on a bigger stage. The Unorganised Workers Social Security Act 2008 further extends this scheme, along with other life insurance and pension schemes, to large parts of the non-BPL population. The National Advisory Council wants to expand the RSBY into a National Health Entitlement Plan that guarantees universal free access to both in-patient and out-patient care (currently, the RSBY is limited to the former). This could have severe fiscal and growth implications down the road.

In Chhattisgarh, the smart card issued under Rashtriya Swasthya Bima Yojna (RSBY) for providing healthcare cover to people living below poverty line will now be used for the distribution of grains at cheaper prices through public distribution system. Though the scheme turned out to be a flop in Uttar Pradesh, Delhi and Maharashtra, Bharatiya Janata Party-ruled Chhattisgarh is going to implement the scheme.

Chhattisgarh government has made all arrangements for providing cheap rations to the smart card beneficiaries through the PDS. As per the plans, the 64 KB health smart card providing Rs 30,000 health cover to BPL families will have the records related to the grains distributed through government-run ration stores. Ration card number and the detailed description related to the distribution of grain will be registered in the card. Interestingly, this will help in bringing transparency in the PDS.

The Centre-sponsored RSBY provides Rs 30,000 annual health cover to about 28 million families in the country. According to sources, the scheme has been running successfully in many states, but it has received poor response in UP, Delhi and Maharashtra.

It is now operational in the prime districts of Jammu and Srinagar. The state government also plans to implement the scheme in other districts within a year. The project was launched by the central government some years ago, but was unfortunately not implemented in Jammu and Kashmir then. About 24 percent of Jammu and Kashmirs population lives below the poverty line. This scheme would ensure they receive timely medical aid, especially during emergencies.

Mizoram has made it mandatory for every doctor to serve two years in remote areas. Now, doctors do not mind serving in remote areas since they have a fixed tenure of two years. A total of 110 healthcare officials were recruited in 2009 and 2010 and posted to rural areas. The results are self-evident. Malaria deaths have come down from 119 in 2009 to 31 in 2010. Admission of pregnant women in hospitals for delivery has increased from 65 percent in 2008 to 76 percent in 2010. Mizoram is also the only state in the North-east to have a government eye bank. Now, every registered poor patient gets treatment worth Rs 1 lakh free in government hospitals. The critically ill get free treatment of up to Rs 3 lakh.

The government will use smart cards issued for the Rashtriya Swasthya Bima Yojana, or RSBY, to also deliver life insurance cover to the poor. The finance ministry will ride on the RSBY delivery mechanism to provide life insurance cover to the poor under the Jan Shree Bima Yojana. There are a large number of RSBY beneficiaries who are so far not included under JSBY, but they will now get covered. As we expand the RSBY scheme to more unorganised sector workers, it will also help spread the JSBY scheme.

The decision to incorporate the JSBY in the RSBY card is at present being examined by a technical team which will make the required changes in technology. The government has already approved increasing the capacity of the RSBY card from 32 KB to 64 KB to store more information.

An investigation into the Rashtriya Swasthya Bima Yojana (RSBY) has suggested that the open health insurance programme provides a great comfort to the economically poorer strata of society.

Under the RSBY, over 26 million family groups have been insured and the hospitalisation costs of over 3.5 million people have been borne. The bottom line is that the RSBY has witnessed unprecedented growth during the last few years. Now it is being recognised as the worlds largest open health insurance programme.

The investigation shows that contest has pushed the reward down even though claims proportions have increased. The Government has set a ceiling price of Rs 750 per family for RSBY. However, the median reward per family has actually come down to around Rs 500-550. In states like Himachal Pradesh and Uttarakhand, the reward is under Rs 400 per family. For the first time IT applications are being used for social sector scheme on such a large scale. Every beneficiary family is issued a biometric enabled smart card, which holds data pertaining to fingerprints and photographs. All the hospitals empanelled under RSBY are IT enabled and connected to the server at the district level. This will ensure a smooth data flow regarding service. President Pratibha Patil, in her recent address to Parliament, said it was expected that the RSBY scheme will be expanded to 70 million families by the end of the Twelfth Five Year Plan, which begins from the current fiscal.

The finance ministry has already allocated Rs 1,500 crore for the RSBY scheme for fiscal 2012-13, against just Rs 360 crore allocated last year. Even the last years allocation had been increased through supplementary grants.