The Rashtriya Swasthya Bima Yojana (RSBY) has empowered the BPL population with the ability to avail quality healthcare services free of cost. Within a span of two and a half years, the scheme has provided healthcare cover to almost 70 million people living under the poverty line.

In conversation with Divya Chawla from eHEALTH, Anil Swarup talks about the strengths of RSBY and the tremendous work being done under this scheme in India. 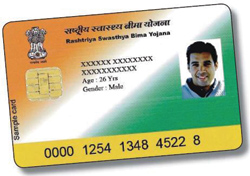 What is the background of the Rasthriya Swasthya Bima Yojana (RSBY) and its major objectives?

Launched on 1st April, 2008 by the Ministry of Labour and Employment, Government of India, RSBY is the first ever paperless health insurance scheme, worldwide. The scheme aims to provide health insurance coverage for below poverty line (BPL) families and protect them from the financial liabilities because of costs incurred on health ailments that require hospitalisation. The scheme already has 5000 empanelled hospitals. The RSBY beneficiaries are entitled to hospitalisation coverage up to Rs. 30,000 for most of the diseases that require hospitalisation by paying a minimal registration fee of Rs. 30 per year for a family of five.

The premium for the scheme is paid to the insurer by the Central and State Governments. The scheme covers 727 surgical packages and the government has fixed the costs for most of these interventions. All hospitals, while signing the contract have to agree to the pre-set costs. Another benefit of the scheme is that it has no age limit and it covers pre-existing conditions from day one.

Since the inception of the scheme, 17 million smart cards have already been rolled out covering a population of approximately 70 million. RSBY is also one of the fastest scaling schemes. Haryana was the first state to take up the scheme, followed by Delhi.

The Government used the BPL data as the base data for selecting the potential beneficiaries of the scheme. However, now the Government is planning to extend the scheme to other categories of the population as well.

How did the genesis of the scheme take place?

The target population of the scheme was looked at, very closely, before implementing it. As the target population comprised of illiterate BPL families, the Government decided that the scheme should be cashless and paperless. Further, most of these people are migrants and hence the scheme had to be designed in such a way, whereby it can be available all over the country.

What is the basis of selecting an insurance company/vendor for providing health insurance in a particular district or area?

The insurance vendors for RSBY are selected on the basis of a competitive public bidding process held by the respective state governments. The Government of India requires various elements to be included in the technical bids. Technically qualified bids further go through a financial uation process, where the insurer with the lowest bid is selected for providing health insurance in a state of a particular district.

The financial bid is the amount payable by the Government for the annual premium per insured household. The insurer must further agree to provide the benefit package prescribed by the Government through a cashless facility by issuing smart cards to all beneficiaries.

The individual contracts are decided as per various districts or states and the insurer has to agree to set up an office in that region. Only one insurer can operate in a single district at any given time, while more than one insurer can participate in a particular state. As of now, the scheme has 11 insurance vendors—4 public sector and 7 private sector.

What is the financial structure of the scheme?

As RSBY is a Government sponsored scheme for the BPL population of India, majority of its funding, almost 75 percent is done by the Central Government, while the respective state governments invest the remaining 25 percent.

However, in case of Jammu and Kashmir and the North-Eastern states, the contribution of the Central Government amounts to 90 percent, while the respective state governments pay the remaining 10 percent. The premium amount that the Government pays to the insurance company, ranges between Rs. 450 and Rs. 650, for a family of five.

How has the implementation of IT helped in developing and facilitating various processes of the scheme?

India is the only country where IT applications are being used at a high level to empower the rural population. As of now, the RSBY scheme demonstrates the largest use of IT applications in rural areas. The scheme employs IT at a massive level, because the Government before launching the scheme, realised that the previous such health insurance schemes failed because of lack of IT applications. Moreover, implementation of IT ensures the scheme to be fool proof.

A major challenge faced while implementing the scheme was that most of the target population of this scheme comprised of migrants. IT applications were recognised as the only viable solution to overcome this challenge. The scheme provides a smart card to the beneficiary, which can be used anywhere in the country and hence is beneficial for the migrant population. Further, use of the biometric enabled smart card makes the scheme cashless and paperless as the beneficiary just needs to present it at the hospital and avail all facilities without paying any money. The smart card also solves all problems related to security of the data. The RSBY smart card tracks every single penny spent, electronically and also ensures that the money is issued to the right person. To ensure that the card reaches the right person, all smart cards are printed and delivered on the spot.

Currently, there are 11 sets of software that make this scheme possible. Three of these are security software, developed internally, by the National Informatics Centre (NIC). Two are data management software, one of which has been provided by the World Bank. Further, various insurance companies have developed their own software.

We are now working towards developing a platform that can facilitate real-time data collection.

India is the only country where IT applications are being used at a high level to empower the rural population. The RSBY scheme employs IT at a massive level, because the Government before launching the scheme, realised that the previous such health insurance schemes failed because of lack of IT applications.

What are the major USPs, benefits and advantages of the scheme?

The biggest USP of the RSBY scheme is the empowerment it provides to the beneficiary. By being a RSBY smart card holder, the beneficiary has the freedom to choose from the empanelled private as well public hospitals to avail the best possible treatment for his family. The scheme has done well, because it has business sense for all stakeholders involved. The model of the scheme is conducive both for expansion of the scheme as well as long term sustainability. The insurance company is motivated to insure the maximum number of BPL families because he is paid a premium for each insured household. As, the hospital is paid per treated beneficiary, it is also motivated to provide treatment to the RSBY beneficiaries. The money earned by the public hospitals can be used by them for their own purposes.

Several NGOs are now actively participating in the scheme, because they have the incentive of being paid for the services they render in reaching out to the RSBY beneficiaries. The government’s incentive is its ability to provide health insurance to a large portion of the BPL population by paying a certain sum of premium per year per family.

The scheme is also running smoothly because of the IT implementation. All families are provided with biometric enables smart cards that have their fingerprints and photographs. Further, all hospitals empanelled under RSBY are IT enabled and connected to a server at the district level, which ensures smooth data flow. The use of biometric enabled smart cards has also made the scheme fool proof. It is ensured that the card reached the correct beneficiary as there remains an accountability for issuance of the smart cards.

RSBY is also evolving a robust monitoring and uation system that can track all transactions happening across the country and and provide periodic analytic reports. Data analysis will further help in improvements of the scheme.

Although, RSBY provides insurance cover for a family of five, yet the USP of the scheme is that if a child is born in the family, he/she is automatically insured, in spite of being the sixth member of the family. The scheme also includes maternal complications, because of which there has been a rise in the number of institutional deliveries as the beneficiaries do not have to pay for them. Further, the government is also planning to include preventive care in the list of diseases covered under the scheme.

“Technology is enabling healthcare providers to engage directly with patients”