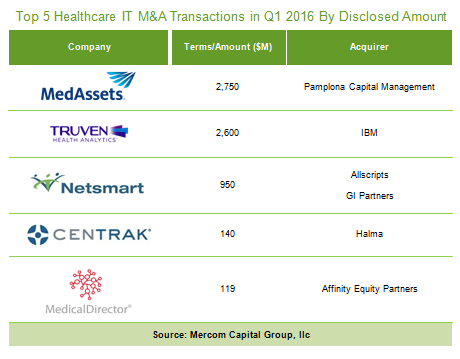 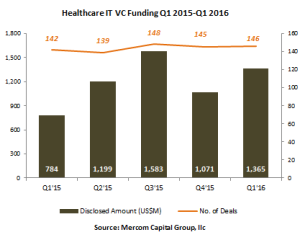 Mercom Capital Group, a global communications and research firm, released its report on funding and mergers and acquisitions (M&A) activity for the Healthcare Information Technology (IT) / Digital Health sector for the first quarter of 2016. Mercoms comprehensive report covers deals of all sizes across the globe.

Venture capital (VC) funding, including private equity and corporate venture capital, in the Health IT sector increased 27 per cent quarter over quarter (QoQ), coming in at $1.4 billion in 146 deals compared to $1.1 billion in 145 deals in Q4 2015; it was also up 74 per cent compared to the same quarter of last year. Total corporate funding raised in the sector including VC, Debt and Public Market Financing for Q1 2016 came to $1.5 billion.

The Health IT sector is off to an impressive start this year with significant funding activity in the first quarter led by wearables, data analytics and telemedicine. Data analytics and telemedicine companies reached a significant milestone, each crossing $1 billion in funding raised to date. Health IT public companies, meanwhile, continued to underperform, commented Raj Prabhu, CEO and Co-Founder of Mercom Capital Group.

There were 53 early-stage deals at or below $2 million, including 14 Accelerator and Incubator deals. 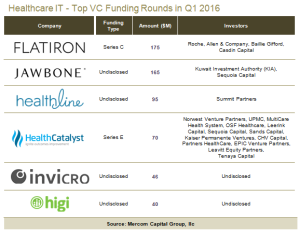 A total of 318 investors, including threeAccelerators/Incubators, participated in Healthcare IT deals this quarter. A total of 27 investors participated in multiple rounds this quarter. Chicago Ventures, Jazz Venture Partners, Jump Capital, Lux Capital, Sequoia Capital, Social Capital, Tribeca Venture Partners and UPMC were involved in the greatest number of funding deals with three each.

Health IT VC funding deals were spread across 16 countries in Q1.

There were two IPOs this quarter; Oneview Healthcare and Senseonics together accounted for $91.5 million. There were a total of 615 companies and investors covered in this report.