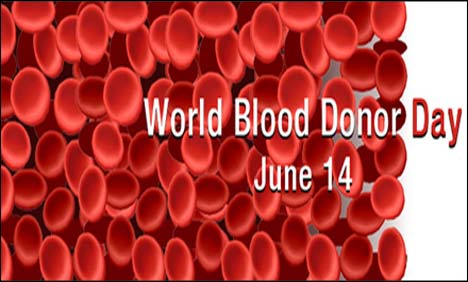 Despite being a country with a population of 1.2 billion, India faces a blood shortage of 3 million units. The problem can be addressed if an additional two percent of Indians donated blood, health experts say.

According to a 2012 World Health Organisation (WHO) report, only nine million units are collected annually, while the need is for 12 million units.

“The shelf-life of donated blood is 35 to 42 days. There is a constant need to replenish stocks in our blood banks. The problem could be addressed if only two percent more Indians donated blood,” Anju Verma, chief medical officer, Rotary Blood Bank, told IANS.

Reports also suggest that only one percent of eligible donors do so everyday.

“Healthy donors are between the age of 18 to 65 years. So they should come out and donate blood,” added Verma.

Apart from these there are also disorders like sickle cell anemia, thalassemia and haemophilia that require repeated blood transfusions.

Importantly, the need is not only for blood but for “safe blood” and WHO has “Safe blood for saving mothers” as its theme for World Blood Donors Day on June 14.

Hence, safe blood can be collected with proper tests, quality management and an experienced and efficient medical team at a blood bank.

“Blood banks are empanelled by the government and all authorised centres should follow blood safety guidelines as listed by the National Aids Control Organisation (NACO). The list of empanelled blood banks should be made available to the public through the media on a periodic basis,” Monhanty added.

The issue of blood shortage is also due to lack of voluntary donors, though the figure has been rising, particularly in states such as West Bengal, Maharashtra, Tamil Nadu, Gujarat, Chandigarh and Himachal Pradesh.

“There are still states lagging because collections from individual Voluntary Blood Donation (VBD) are still very low and the majority of the blood donors are family VBD and replacement blood donors. Awareness of VBD needs to be increased and retained for a sustainable blood supply in such states,” added Mohanty.

Echoing this, Anita Suryanarayan, chief of lab services, Lister Metropolis Pvt. Ltd said: “As there is deficiency of blood during an emergency, the need arises to rely on professional donors who donate blood on a regular basis for money.

“In this case, safety becomes an important question as they might not have a suitable health condition for to donate. This indicates that a rise is needed in the number of voluntary donors who refrain from donating blood because of their lack of awareness and ignorance,” Suryanarayan told IANS.

Experts stress that only awareness and more sensitization and enhanced blood donation camps can match the shortage.

Rotary’s Verma said: “Government should promote and assign ambassadors to promote the cause and ensure easy accessibility to go and donate at various locations.

“Acknowledge students who are regular donors and contribute to this noble cause. Promotion through hoardings and electronic and print media should be done at a regular intervals so that the practice of donating blood becomes a way of life,” said Verma.

Experts said like in other cases, there are a number of myths associated with blood donation that needs to be busted.

“The myths are like people with high cholesterol, diabetes or hypertension cannot donate blood, or that donating blood could lead to infections as attention is not paid on hygiene and safety in hospitals or that people on medication cannot donate blood. All these myths can only be removed through awareness,” Suryanarayan added.

(Shradha Chettri can be contacted at shradha.c@ians.in)