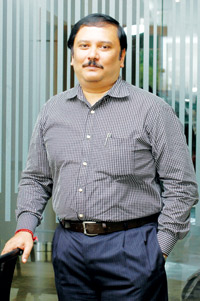 Kalaignar Health Insurance Scheme had saved the lives of several poor people in Tamil Nadu. Launched in July 2009, the scheme today covers around 1.35 crore BPL families in the state.

Dr S Vijayakumar, Special Secretary at the Health and Family Welfare Department in Tamil Nadu, in an interaction with Dhirendra Pratap Singh, shared his perspective on this scheme and threw light upon the role of IT in streamlining government-run health insurance schemes. Excerpts:

Kalaignar Health Insurance Scheme had saved the lives of several poor people in Tamil Nadu. Launched in July 2009, the scheme today covers around 1.35 crore BPL families in the state.

Dr S Vijayakumar, Special Secretary at the Health and Family Welfare Department in Tamil Nadu, in an interaction with Dhirendra Pratap Singh, shared his perspective on this scheme and threw light upon the role of IT in streamlining government-run health insurance schemes. Excerpts:

What is the background of the Kalaignar Health Insurance Scheme and how did the genesis of the scheme take place?

In Tamil Nadu, though we have 16 Government medical colleges, yet only three to four hospitals provide high-end surgical treatments like cardiac surgeries, cancer treatment and neurological treatment. This leads to a huge waitlist over a period of time. High-end surgeries are not performed in many Government medical colleges and hospitals, though a lot of people approached the government facilities only. To fill up the gap, we took the decision to operationalise the Kalaignar Health Insurance Scheme in Tamil Nadu.

This scheme is implemented on a public private partnership mode involving the insurance company, the network of empanelled private sector hospitals and the state agencies. This model along with other mechanisms institutionalised in the scheme makes it an efficient and cost-effective programme. Private insurance company namely, Star Health & Allied Insurance Company, contracted to implement the scheme, has entered into MoU with a number of hospitals in private healthcare and hospitals throughout Tamil Nadu. The entire premium to the tune of `600 crore (approximately) annually is borne by the Government of Tamil Nadu at `469/family + service tax. Totally, 1.34 crore families have been enrolled and smart cards have been provided.

Could you detail upon the remarkable achievements of Kalaignar Health Insurance Scheme in recent years?

In this scheme, one of the important factors, is the availability of a good private sector network. Another is the IT enabled mode of operations, which helps in providing cashless treatment and binds all aspects in implementing the scheme, which is a major success of this scheme. Fund transfer becomes easy because of IT enabled solutions. It has really helped us make the scheme effective and efficient.

Any family whose annual income is less than `72,000 is enrolled as beneficiaries. The insurance scheme provides cashless insurance protection against a host of identified high-cost medical contingencies that require surgical care and hospitalisation. About 700 identified surgical and medical procedures are covered and treatment is available to the beneficiaries. Modern and sophisticated hospitals are tied up and networked exclusively for attending to the insured population. Kalaignar Insurance Scheme for Life Saving Treatments has converted the dream of the people to access to quality medical care and has provided financial protection against huge medical expenses for high-end treatment into a reality for the Below-Poverty-Line (BPL) or low income population.

Many people still do not understand the concept of Health Insurance. Health Insurance also has to be regulated properly. If the linkage is not proper, then it can be detrimental to the hospital, insurance companies and importantly, the buyer

How has the implementation of IT helped in developing and facilitating various processes of the scheme?

Each beneficiary is given a biometric smart card bearing the biometry and photographic details of each member of the family to avail the service. At the hospital, the doctor records all the requirements of the patients and sends to the Star Insurance office for pre-authorisation. All the important pre and post diagnostic details like X-rays, lab test reports are sent on the net and processed by a team of doctors in Chennai. The smart card gives the beneficiary easy access to the hospitals and allows only the correct eligible beneficiary to avail the treatment.

Camps were held across the State and a door-to-door campaign was also launched to identify and enroll beneficiaries, who belong to the Welfare Boards and people satisfying the eligibility criteria. Similar camps were also organised

by the health department to identify eligible people for the treatment.
In the scheme, there are dedicated taluk kiosks for the people, who did not enroll initially for a period of three months and subsequently at the district health quarters for enrolling the people during the entire period of the policy.

Could you explain how Indian healthcare system be reformed if the government becomes a health insurance provider than a healthcare provider?

I personally feel that preventive health taken to control various communicable and non-communicable diseases should still be the primary work of Government.  At the same time, for high-end tertiary healthcare sector where there is a lack of specialists and the requirement is very high, we can use an appropriate public-private partnership model as done in Kalaignar Health Insurance Scheme.

Many people still do not understand the concept of Health Insurance. Health Insurance also has to be regulated properly. If the linkage is not proper, then it can be detrimental to the hospital, insurance companies and importantly, the buyer. It should be managed efficiently and effectively. IT solutions play a major role in operationalising it.

Individuals could be managed according to their health requirements. Kalaignar Health Insurance Scheme has brought down market rate to a large extent. We have minimised the cost of investments made and the whole scheme is cost-effective. Tamil Nadu has done very well in primary and secondary health but in other states wherever there is a gap, we should try to fill the gap by purchasing services. It can be done through insurance or in partnership.  Public private partnership model can play better role in this regard.

Do you think that this scheme is able to fulfill the goals of inclusive growth in India?

Certainly, it has the ability and so far has fulfilled the goals of inclusive growth. The scheme that kicked off in 2009 July is now covering a mammoth size of 1.35 crore of BPL families. We are not only covering the poorest of the poor but also lower-middle income group from urban areas who, if falling into catastrophic illness, would get relegated to the poor category.

In India some of the traditional healthcare companies have ventured into health insurance. Do you think they may be able to run the business better?

If everybody behaves responsibly, the insurer would be benefitted, insurance company would be benefitted and everybody would be benefitted. For any insurance scheme to succeed, it should have following things—it must provide good access to people, maintain quality of care and cost-effectiveness in the system. In Kalaignar Health Insurance Scheme, we are able to control the market and bring down the cost of healthcare delivery. In this scheme a lot of quality control mechanisms have been built-in.

What are the plans ahead?

We want to work efficiently and ensure that there should not be any backlog of cases for any high-end tertiary healthcare requirements in the State.