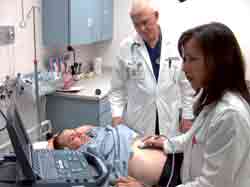 When the global economy was seeing a major downtrend over the past few years owing to recession, the healthcare market continued to grow despite the global meltdown. This held true for almost all sectors within the healthcare industry including radiology equipment. Ultrasound, which forms one of the oldest and most crucial radiology segments has been a part of this successful growth story. The ultrasound market in India was estimated at Rs.485 crore in 2009. Going further the market size is expected to exceed the `1100 crore mark by 2015 with an estimated CAGR of 13-14 percent. The ultrasound systems, in India, are priced somewhere between Rs.70 lakhs to Rs.1.5 crore. The global market for ultrasound was valued at a massive US $2.9 billion in 2009 and is expected to become double its size by the end of 2012.

The growing trend of miniaturization and increasing trust in portable systems has led to a significant increase in the market of hand-carried ultrasound systems in the recent years. Although the western countries were the first ones to adopt this technology, yet other regions of the world such as Eastern Europe, Latin America and parts of the Asia Pacific including India, are now beginning to show significant interest in this equipment. In the traditional ultrasound systems market, colour Doppler equipment accounts for a major chunk, while black and white scanners are now beginning to slowly fade out.

“The performance, size, durability, ease-of-use and cost-effectiveness are the prime advantages of SonoSite’s hand-carried ultrasound system”

Within the colour Doppler equipment market also, the mid-end segment is experiencing the greatest growth. While owing to the recessionary trends, the low-end segment and cart-based systems are also experiencing significant growth. The high-end segment is however, moving slowly, but is expected to catch-up as the economy emerges from recession. The greater interest of buyers in mid-end and low-end equipment as compared to high-end equipment is because of the increasing functionality and picture quality of systems at the lower end of the market. In a way, the equipment prices in the ultrasound market have also been stabilized because of the improving quality and functionality of lower-end systems.

Some of the key drivers for this explosive growth include flexibility, ease-of-use and lower costs as compared to most of the other imaging modalities. The overall ultrasound market has undergone tremendous product innovations such as decreased boost up times, increased battery backup, and stronger service contracts and warranties for probes that are positively affecting the future market penetration of ultrasound systems. There has been a rise in the number of hand-carried ultrasound equipment for specific procedures such as nerve blocking, musculoskeletal and breast imaging. One of the key drivers for growth in countries like India and China, in particular, is the booming population. As Pavan Behl, Country Manager for SonoSite India, one of leaders in hand-carried ultrasound technology put in “Healthcare infrastructure is developing rapidly across India and the medical fraternity is gradually becoming aware of the advantages of using these systems in terms of timely diagnosis leading to faster patient recovery and saving vital lives.”

Further owing to an increased awareness of the advantages offered by portable color ultrasound systems, and an ever increasing number of radiologists and physicians, India will continue to present growth and for ultrasound manufacturers in the future. According to Dr Kishor Taori, President, Indian Radiological & Imaging Association (2010) and Head, Department of Radiodiagnosis, Government Medical College, Nagpur, “The Indian ultrasound science is at par with the global standards. The manufacturers have responded in a very positive way and growth is evident in all segments.” Commenting on the cost of the technology, he added, “Prices of ultrasound equipment have really come done, which is a very good thing in the India market.” PV Jose, General Manager, Medical Electronics, BlueStar India said that, “Economic viability of ultrasound Technology, excellent diagnosis, patient awareness and local support services are the key growth drivers for ultrasound.”

The most upcoming technology in the ultrasound segment is miniaturization. Commenting on the benefits of hand-held ultrasound machines, Dr Bharat Aggarwal, Director, Medical Operations, Diwan Chand Satyapal Aggarwal Imaging Research Centre, said “Hand-held ultrasound is going to be an important tool for gastroenterologists as instead of palpating the liver they can easily use the hand-held machine to view the liver. It can also be used by the gynaecologist to have a look at the uterus.” He further added that, “The hand-held system can act like an extended diagnostic tool, which is readily available with the clinician.” Pavan Behl said “Hand-carried ultrasound is an essential, everyday tool in clinical practice. Today, ultrasound visualization for procedural guidance is becoming a standard of care among many non-traditional ultrasound user groups, including emergency medicine, breast surgeons, intensivists and anesthesiologists.”

With the recent technological explosion, the new dimension in ultrasound scanning has arrived. From 2D to 3D to 4D, the ultrasound, which once provided only black and white images, is set to revolutionalise the way clinicians see unborn babies. A 4D ultrasound takes multiple images in rapid succession, creating a three-dimensional motion video, which is invaluable for diagnosis purposes. The difference between 3D and 4D ultrasound is real-time imaging. Further IT implementation in ultrasound machines and customized sophisticated software have allowed for network connectivity in portable hand-held devices. A fully digital 4D ultrasound system is set to provide an integrated solution for medical imaging applications, allowing practitioners to provide faster treatment and improve therapeutic success rates.

There has recently also been an emergence of sophisticated technologies and software that allow physicians to view ultrasound images on their PDAs. This is much needed in a country like ours, where a major chunk of the population is living in rural and remote areas without basic access to healthcare services. This allows technicians to take ultrasound scans and send them via IT-enabled services to specialists stationed far away, who can analyse them at any point of time from anywhere. Further, this technology can also come handy in emergency situations, which requires immediate attention of a doctor, in a certain situation. Ultrasound images can be sent to the specialist in no time, which allows reducing the analysis time to a huge extent.

However, the technology has certain drawbacks as well. Commenting on the key issues related to use of PDAs for ultrasound scanning, Dr Bharat Aggarwal said, “A lot of IT vendors are developing technologies to see ultrasound images on PDAs. However, these images cannot be used for diagnostic purposes because they offer smaller-sized images and lower resolutions. Hence, PDAs can be used for viewing and advising purposes but not for diagnosis.”

Liver elastography is one of the recent innovations in ultrasound that allows detecting liver diseases with the help of ultrasound scanning. The major advantage of this technology is its price, which is much less as compared to CT and MRI procedures. India being a cost-sensitive market, a low-priced technology always has an edge over the expensive ones. Moreover, since liver diseases are highly prent in our country, a low-cost technology for detecting these would definitely have significant growth prospects. Sharing his perspective on elastography technology, Dr Bharat Aggarwal said, “We are keenly looking at ultrasound elastography”both liver and breast, as it is currently one of the latest technologies in ultrasound segment.”

So to say, ultrasound technology is set to take over the radiology market with its consistent and unprecedented growth. As India is one of the fastest growing economies in diagnostic imaging this trend is going to continue in future as well coupled with a technological explosion.

BYTE OF THE PIE