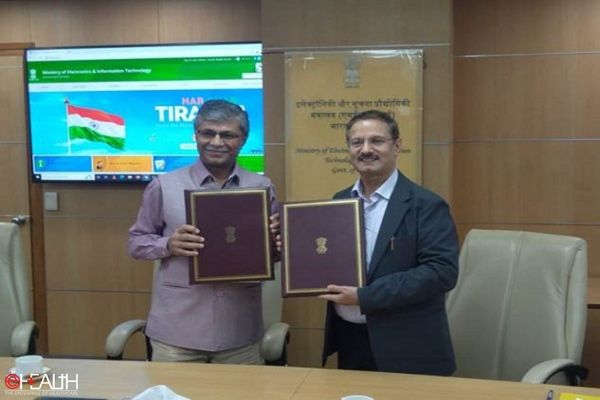 The Ministry of Ayush has signed a Memorandum of Understanding (MoU) with the Ministry of Electronics and Information Technology (MeitY) for providing technical assistance for the digitalisation of the Ayush Sector under the Ayush Grid project for a span of three years.

As per reports, the Ministry of Ayush’s multi-aspirational project namely ‘Ayush Grid’ is soon going to be digitally upgraded. This is mainly done to bring all the services on one platform.

Vaidya Rajesh Kotecha, Secretary, Ayush, and Alkesh Kumar Sharma, Secretary MeitY signed the MoU, on behalf of both the Ministries.

According to an official statement, this MoU continues the previous MoU which was signed in the year 2019.

Further, both the Ministries have agreed to collaborate on the project with assistance from other organisations operating under the MeitY, which will offer all technical support necessary for the Ayush Grid project, including the adoption of cutting-edge technology.

The key reason for introducing the ‘Ayush Grid’ initiative by the Ministry of Ayush under the Digital India Program is to make better use of information and technology to transform operational effectiveness, boost service delivery, and enhance the quality of service.

Moreover, allowing integration of all stakeholders and functions/services related to Ayush systems of health care, the Ayush Grid platform is thus envisaged to be the IT backbone.

The Ayush Grid, a proposed central IT platform, is expected to offer numerous IT services for all systems under Ayush, including Ayurveda, Yoga & Naturopathy, Unani, Siddha, Sowa Rigpa, and Homeopathy, across functional areas such as healthcare delivery, education, research, capacity building, drug licensing and standardisation, as well as media outreach.

Further, to offer guidance on the Ayush Grid project, a High-Level Advisory Committee (HLAC) was organised, co-chaired by the Secretary of Ayush and MeitY.

Notably, NeGD and BISAG-N made major contributions to the finalisation of numerous technical documents, including the Direct Project Report (DPR) and the technical solution design of the project.

Additionally, a working group with experts from NITI Aayog, National Health Authority (NHA), MeitY, and other organisations was established under the Chairmanship of J. Satyanarayana, Former Secretary, MeitY, and Chairman, Unique Identification Authority of India (UIDAI), to address technical and strategic issues related to the Ayush Grid project, along with providing inputs on the right architecture, identifying core building blocks, leveraging development under Ayushman Bharat Digital Mission (ABDM), and understanding the requirement of building a public-private ecosystem. This aided the Ministry in shaping the technical structure of the project.

Currently, the recently signed MoU is a key tool for utilising MeitY’s technical assistance in the Ayush Grid project of the Ministry of Ayush.