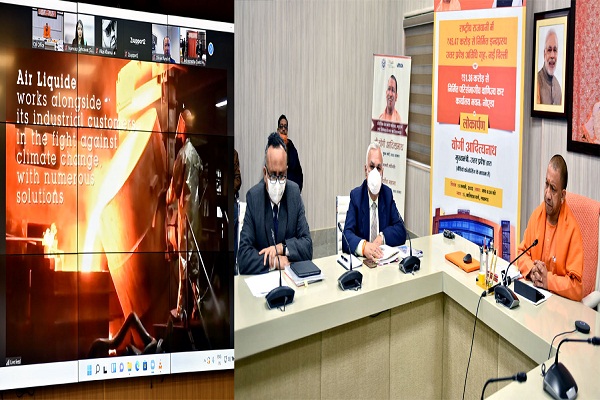 Aiming at assuring self-reliance in the field of medical oxygen production, Chief Minister Yogi Adityanath on Wednesday laid the foundation stone of a large air separator plant at Mathura.

This proposed plant in the industrial area Kosi Kotvan, Mathura will be built by ‘Air Liquide’ company with an investment of over Rs 300 crores. Laying the foundation stone, Chief Minister Yogi said that during the second wave of corona, the whole world had seen and understood the need for medical oxygen. Oxygen was supplied to remote areas through Air Force planes, tankers etc. “In such a situation, UP is moving ahead with the goal of self-reliance in the field of oxygen production, ” he pointed out. This plant of Air Liquide in Mathura will not only produce medical oxygen, but also liquid nitrogen and industrial oxygen. Interacting with the officers of Air Liquide Company, the Chief Minister thanked them for investing in Uttar Pradesh assuring to extend all kind of cooperation for this unit of daily capacity of 362 tonne to be completed in a time bound manner.

Speaking on this occasion, Industrial Development Minister Satish Mahana said that the oxygen plant of Mathura would prove useful for the state and will also help in employment generation. On behalf of Air Liquide Company, Vice President Oliver Radant expressed his gratitude to the Chief Minister for allotting the land for the plant in a very short time.