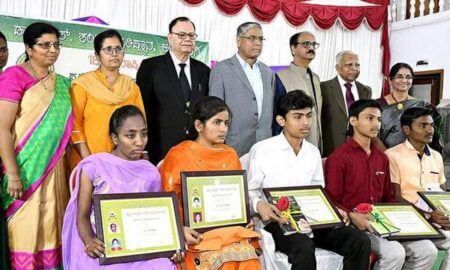 Five MBBS students of Karnataka have been selected for the Dr PS Shankar Medical Student Scholarship and were felicitated during the 18th anniversary celebrations of the pratishthan in Kalaburagi recently.

According to a press note, a physically challenged girl Soundarya Pon Moliyan was the cynosure of all eyes during the function. She did not let a 75 per cent disability come in the way of her academic pursuits. She scored 86.60 per cent in the SSLC examination and 76.66 per cent in PU examinations and got a medical seat in the Shimoga Institute of Medical Sciences.

All the five students studied in Kannada medium up to SSLC. The selected students would receive scholarship of Rs 1,000 each for 54 months till they complete their medical course.