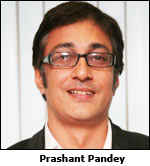 Pandey takes over from Jayant Singh who has been given a new role. He has been appointed as the vice president and general manager of GSK Consumer Healthcare Brazil. The changes will come into effect from February 1, 2015.

Pandey, in his current role is category development director, Family Nutrition India subcontinent. He set up and expanded the category team and drove innovation across the portfolio. In his new role, he will be a member of the India Leadership team, reporting in to Zubair Ahmed, managing director, GSK Consumer Healthcare India.

Ahmed says, “Jayant’s contribution to the Indian sub-continent business has been remarkable. I am sure he will drive similar levels of performance in his new role. I am also delighted to welcome Prashant. His vast knowledge of the company and functional expertise are sure to bring in new dimensions to the team. I wish him all success.”

Pandey joined GSK CH India in 2008 as marketing head, Horlicks from JWT, where he spent many years in account planning and management. In his first assignment with GSK as head, Horlicks, he led several initiatives for driving accelerated growth on Base Horlicks and its different variants and extensions.